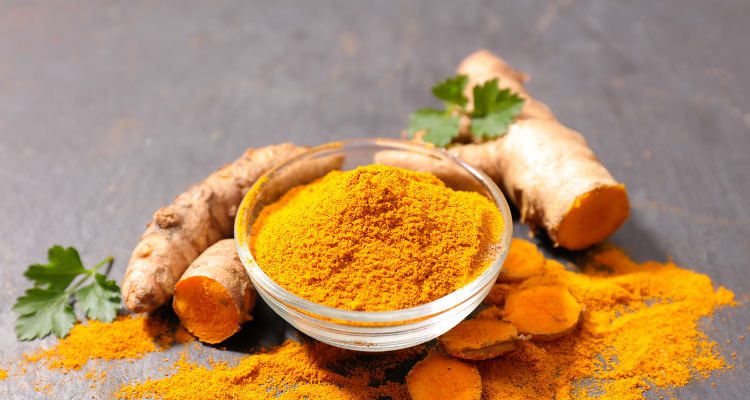 Turmeric is a very common herb and one of the most powerful, too. The golden-colored spice has a pepper-like aroma and sharp taste. Turmeric’s use is not limited to adding flavor to many dishes as turmeric benefits your health in numerous ways, too, owing to its rich nutrient content.

Turmeric spice contains the healing compound curcumin, and studies have suggested it can be more advantageous than many prescription drugs.

Turmeric is considered an effective disinfectant and can be used as a natural antiseptic and antibacterial agent. If you get a cut or burn, sprinkling turmeric powder on the wound could help it to heal faster. It may be used in psoriasis treatment or to assist in repairing damaged skin.

Turmeric contains lipopolysaccharide and antibacterial, antiviral, and antifungal agents that can help boost the immune system and provide protection against colds, coughs, and flu.

A person with a stronger immune system has a lesser chance of being infected with viral diseases. In the case of cold and cough, regularly drinking warm milk mixed with a teaspoon of turmeric may help with the infection.

Turmeric can potentially treat inflammation linked to osteoarthritis and rheumatoid arthritis with its anti-inflammatory properties. These agents also destroy free radicals in the body, which damage the body cells.

People suffering from rheumatoid arthritis have been observed to get greater relief from joint pains if they consume turmeric regularly.

Turmeric’s curcumin may help to prevent prostate cancer. It’s also been shown to stop prostate cancer cell growth and destroy cancer cells. According to research, turmeric is one of the best protectors against tumors caused by radiation.

One of the major causes of Alzheimer’s disease is brain inflammation. A mouse study found that turmeric helped to remove the build-up of plaque in the brain and improve the flow of oxygen, which helps in slowing down Alzheimer’s disease.

Turmeric increases the flow of bile, which, in turn, helps to break down fat cells stored in the body.  This helps to achieve and maintain a healthy body weight. It is suggested to have one teaspoon of turmeric powder with every meal.

Turmeric energizes the gallbladder to produce bile, which improves digestion. Turmeric is also used to reduce symptoms of bloating and gas. In case of any digestive problems, turmeric must be consumed in raw form to reap maximum benefits.

Steroids have a number of side effects listed by the UK’s National Health Services (NHS), while curcumin doesn’t have any. Steroids’ side effects include:

Some symptoms like chronic inflammation of the eye, which was commonly treated by using steroids, are now being treated with curcumin.

Curcumin has a good ability to control inflammation. Oncogene published the results of a study stating that among all the anti-inflammatory medications in the world, aspirin and ibuprofen are the least effective, while curcumin is the most effective. Inflammation causes diseases like cancer, ulcerative colitis, arthritis, high cholesterol, and chronic pain.

The medicines used to slow and prevent blood clotting like aspirin, clopidogrel, diclofenac, enoxaparin, and ibuprofen have dangerous side effects like excessive bleeding, hemorrhage, back pain, and headaches.

With arthritis drugs (diclofenac sodium), people may develop a leaky gut and heart disease, whereas with curcumin, treatment is safe and doesn’t have any adverse side effects. The countless benefits of curcumin help to treat people suffering from different types of arthritis.

When exposed to the skin, some people have reported allergic reactions to turmeric like a mild, itchy rash. Turmeric is extremely beneficial when taken in small amounts, but high doses can cause the following:

People taking medications and anti-coagulants like aspirin, clopidogrel, and warfarin must be careful about using turmeric in their food or supplementing with it.  It also affects medications such as non-steroidal, anti-inflammatory drugs. Those taking prescribed medication should include ample amounts of fresh, organic turmeric in their diets to reduce the adverse effects of such medicines.

Whisk together milk, turmeric, ginger, lemon juice, cardamom, palm sugar, and salt in a small bowl until sugar and salt have dissolved. Let it stand for five minutes for the flavors to meld.

Strain through a fine-mesh sieve into a cup, and extract juices by pressing on the solids and discard the solids. Fill a glass with ice. Pour latte over and serve with lemon wedge.

Gently press oregano and thyme with a wooden spoon to release oils. In a medium saucepan, heat herbs, ginger, turmeric, peppercorns, and eight cups of water until an instant-read thermometer reads around 130°. Do not boil. Reduce the temperature to low and let mixture steep six minutes.

Add almond milk, garlic, honey, and citrus juice, and stir to dissolve honey. Strain in a pitcher and press the herbs to extract the juices. Serve hot.

Turmeric tea benefits the immune system. The spice can also be taken in form of supplements, but it is always best to consult your doctor first.