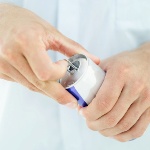 Could drinking an energy drink cause the same damage to your arteries as eating a big steak does? The answer to that is yes!

Over the past few years, the energy drinks market has grown exponentially—the sale of energy drinks in the U.S. reached $8.60 billion in 2012, which is 12 times more than the amount sold in 2000.

Companies who create energy drinks claim that there are many benefits of energy drinks; for example, they can reenergize you and make you more alert. After all, they’re filled with large dosages of caffeine, sugar, and sometimes vitamins and herbs.

But energy drinks are not without controversy. Recently, Wrigley stopped production of their caffeinated gum after the Food and Drug Administration (FDA) published their safety concerns with the product—each stick of gum had half of the amount of caffeine found in a cup of coffee.

Now, San Francisco is suing Monster Beverage Corporation for marketing their high-caffeinated energy drinks to children. Are there really any benefits of energy drinks?

4 Reasons You Should Stay Away From Energy Drinks:

Many people will mix their energy drinks, such as Red Bull with vodka or another type of alcohol. If consumed together, studies show there’s dangers of extreme side effects, including irregular heartbeats.

This is definitely a combination you want to avoid, because there are no benefits of energy drinks while exercising.

Energy drinks usually contain a lot of sugar, which is harder to absorb when you exercise. If you consume energy drinks while exercising, you will likely feel stomach upset, and it can lead to dehydration.

A new study, conducted by researchers at the Cleveland Clinic, found that the nutrients found in red meat, weight loss pills, and energy drinks can harden your arteries—in much the same manner as eating a big steak.

Energy drinks, along with red meat, contain a substance called carnitine—and when it’s digested, it increases the level of the trimethlyamine N-oxide (TMAO) chemical, which is a precursor for heart disease. This leads to plaque buildup in your arteries, which puts you at greater risk for serious cardiovascular problems.

The problem is that many people fail to realize that their energy drink contains dangerous chemicals—so unlike steaks or soda, which many know to have in moderation, they consume energy drinks without an afterthought.

Per every 12 ounces of soda, there must not be more than 71 mg of caffeine. Energy drinks are not regulated in the same way, and contain as much as 500 mg per serving.

If you’re looking for a quick dose of energy, then don’t turn to energy drinks, because the benefits of energy drinks are not worth it when they come with many other side effects. Instead, eat healthy superfoods that boost your brain, strengthen your body, and make you feel better than ever before.