Home > Food News > 5 Food Additives Sold in the U.S – That Are Banned Elsewhere! 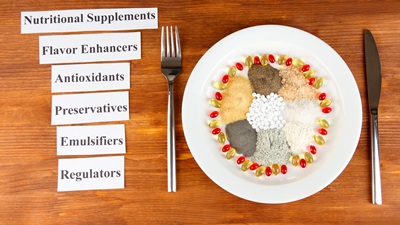 “If I could turn back time. If I could find a way, I’d take back those (additives) that hurt you, and you’d (be healthier).”

I can’t believe I just quoted Cher, but it fits…with a couple word tweaks. I picture it now: A U.S. food executive ponders those words, as they bite into their organic apple, or they stick their fork into a spinach and kale salad.

Foods additives are known to cause various diseases and allergies, yet the Food and Drug Administration (FDA) allows over 15,000 food and chemical additives into U.S. foods.

Why would we allow additives in our foods that are banned in other countries?
Every year, Americans consume about 150 pounds of food additives. Why? Here are a few reasons why:

1. Preservation and preparation food techniques were developed to deal with problems in society, such as waste, storage and foodborne illnesses. Additives can help preserve food longer.

2. Many natural and artificial sources are added to foods to improve their flavor.

3. Synthetic vitamins are added to food to enhance nutrient quality.

4. Society has created this illusion that it should take less time to prepare food, which means there is a market for people looking for quick meals—which are loaded with preservatives to help them last longer.

5. The majority of Western culture and society accepts food additives as being normal.

A great practice is to avoid processed foods all together, while eating more whole, healthy foods. If you are a newbie to this practice, it will be a challenge. Just remember that transition is the end goal, and don’t judge yourself during this process.

You don’t want your “healthy foods” to contain these dangerous food additives, so make sure you know what they are.

5 Food Additives That Are Banned Around The World Except for U.S.

The classic Kraft Macaroni and Cheese contain artificial color additives such as Yellow 5 and Yellow 6. Other processed and easy-to-prepare foods that contain artificial food dyes include cake mixes, cheese, candy and sports drinks.

Yellow 6 and Red 40 are alleged to cause allergy-like hypersensitivity reactions in children. Some dyes also are reportedly contaminated with known carcinogens. Other dangers include connections to brain cancer and nerve-cell deterioration.

Three years ago, TIME Magazine named Olestra one of the worst 50 inventions ever. Olean was created accidentally in 1968, but wasn’t approved as a food additive until 1996. Procter & Gamble distributes it as a calorie- and cholesterol-free fat substitute in fat-free snacks such as potato or corn chips, and French fries. The downside is it eliminates your body’s ability to absorb vitamins, and there have been several adverse intestinal reactions reported from Olean, including cramps, diarrhea and leaky bowels.

Banned: It is banned in Canada and the U.K.

Major side effects of this food additive include birth defects, growth problems, organ system damage, schizophrenia and hearing loss. Sounds like healthy foods should definitely not contain any of this dangerous food additive!

Banned: BVO is banned in over 100 countries, including Japan, and many European countries.

Several of your so-called necessities contain BHA (butylatedhydroxyanisole) and BHT (butylatedhydroxytoluene), including chewing gum, meat, butter spreads, breakfast cereals, nut mixes, and beer. BHA may cause cancer in humans, while BHT is a cause of organ system toxicity. BHA is also considered human carcinogen, and may also cause allergic breakouts and hyperactivity.

Banned: If you want to eat healthy foods, make sure they don’t contain BHA or BHT. Japan and European countries have banned BHA and BHT, while the U.K. ceased the use of BHA in baby foods.

Many milk and dairy products contain rBGH and rBST, which are growth hormones given to dairy cows to increase milk production. The FDA maintains that rBGH is safe for humans despite decades of evidence of its dangers.

The milk from rBGH-treated cows has a large increase of the hormone insulin-like growth factor 1, which can affect various cancers. Growth hormones are also known to cause weakened muscle growth and infertility.