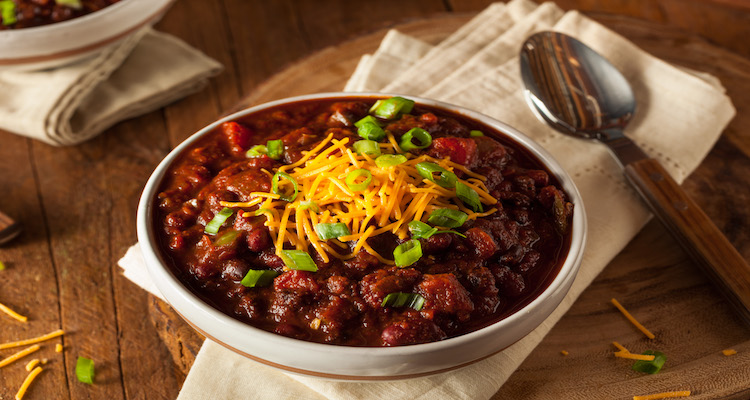 Foodwise, fall is delicious. Chili, stews, soups, shepherd’s pie, and pumpkin spice everything are some of our favorite fall foods that make the season a culinary delight.

But trouble can arise if you’re regularly going in on those autumnal treats. Most of them are calorically dense comfort foods that can lead to weight gain and other health concerns.

Fall comfort foods are made to fill you up, keep you warm, and add some meat to your bones. They’re rich and delicious, and certainly dense. But every once in a while, you’ll need to think about healthy alternatives to fall food classics.

Let’s take a look at how you can still enjoy the flavors of the season without having to endure the massive calorie bombs that come with them.

You may have been waiting all year for a nice, steaming bowl of chili to warm you up on a cool autumn day. And we all know you can’t make just one bowl. So, you’re equipped with enough leftovers to keep you fed for a few meals.

Going heavy on chili with fatty meat like chorizo or Italian sausage, and high-sugar ingredients like maple syrup, chocolate, and brown sugar, can pile up the calories in a hurry.

But it doesn’t have to be this way. In fact, a few simple adjustments can turn a bowl of chili into a very healthful and low-calorie fall meal.

You can easily swap fatty meats for low-fat alternatives. Ground turkey, extra-lean beef, and trimmed sirloin can each substantially cut the fat content. You can even elect to scrap the meat altogether and use red kidney beans, lentils, or other legumes instead.

Switching sugary ingredients for additional spices and seasonings is another way to cut calories.

Most people won’t turn down a chicken wing at any time of year, but the snackable poultry has an increased presence in fall. The reason? Football. But let’s face it; things can’t get much worse for you than a deep-fried chicken wing lathered up in a sugary sauce.

Healthy alternatives are essential if you’re big into wings. Thankfully, there are plenty of options.

Instead of deep-frying wings in grease, consider an air fryer. Air fryers use nothing more than air to give wings a nice crispy skin, so you don’t even need to bread them. Just cook them up and toss in a sugar-free hot or buffalo sauce. Even better, season them with your favorite spices.

Don’t have an air fryer? No big deal. A convection oven will do the job.

You could go one step further and get rid of chicken completely. Crispy cauliflower “wings” are a fiber-rich, healthy alternative that may also promote better kidney health.

Like chili, shepherd’s pie is not inherently unhealthy. It’s all about what you put into it. Using traditional ingredients like lamb and heaps of butter can drive up fat content. Potatoes spread atop may not be ideal for diabetics or others keeping a close eye on their blood sugar, either.

Some simple swaps include extra-lean ground beef as a filling and Greek yogurt as a thickener for the topping. Experimenting with sweet potatoes or cauliflower instead of white potatoes can help reduce the overall sugar content and boost the fiber and general nutritional value.

You can abandon meat completely for your shepherd’s pie, too. Like chili and wings, meat-free recipes are widely available.

Here is a recipe for vegan shepherd’s pie.

In the battle of the apple-filled desserts, apple crisp comes out on top. Okay, so apple crisp might not be “healthy” per se, but guess what? It can be a healthy alternative to apple pie.

By comparison, apple crisp can have far less fat and sugar than apple pie. Serving sizes are also much easier to control.

Healthful ingredients that go into a fresh fall snack like apple crisp include:

Apple crisp also saves calories by using a fraction of the amounts of fat and sugar in a pie.

It can be tough to put “healthy” and casserole in the same sentence. But you can make a pretty healthy green bean casserole if you put your mind to it. The keys are to cut out the condensed milk and canned mushroom soup, and go easy on the butter.

Whole-wheat or gluten-free flour can also help make this fall favorite a little healthier. Here’s a recipe from The Ambitious Kitchen.

Pumpkin spiced beverages are everywhere these days. But they are not good for you. Pumpkin spiced coffees and teas can be loaded with sugary syrups that can send blood sugar and calorie counts into the stratosphere.

You don’t necessarily have to give these things up, however. Instead, consider making them at home. You can make a tea or coffee and spice it up with a sprinkling of nutmeg and cinnamon to get the earthy spice flavor of the season.

Hot toddies and other sweet, calorically dense cocktails can also appear on the scene this time of year. An occasional treat is not a big deal, but try to limit how many you have.

A healthier alternative would be to have a glass of red wine in the afternoon or with dinner.

Soup is a warm, comforting fall meal. It can also be extremely healthy—if you make it yourself.

Store-bought canned soups are packed with sodium that can contribute to high blood pressure and potentially increase the risk of a heart attack.

Canned soups can also contain a number of ingredients that, quite frankly, are nearly impossible to pronounce.

Homemade soups keep it simple. You can use fresh, seasonal produce like butternut squash, leeks, tomatoes, and more to make nutrient-dense and healthful meals.

There are countless seasonal fruits and vegetables to serve as the base for soups. Adding lentils or kidney beans, as well as leafy greens and peppers, can help boost satiety and nutrition.

There are so many seasonal fall foods freshly available that you really can’t miss. Fall produce is absolutely packed with fiber and nutrients like vitamin A and vitamin C, so it’s almost too easy to come up with healthy alternatives. Take a look at what you can come up with to help keep you warm and healthy this fall.