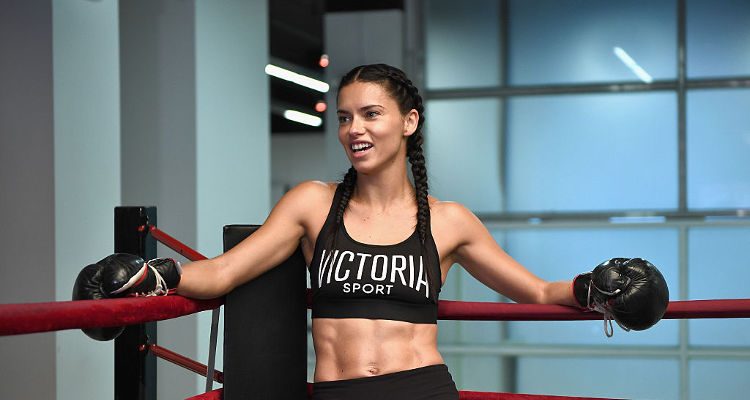 The 16th Victoria’s Secret Fashion show for Adriana Lima is about a week away. However, the Victoria’s Secret Angel says that she doesn’t make any drastic changes to her already healthy diet when she prepares for the highly-anticipated event.

Lima, a mother of two, showed off her grueling boxing workout at the Aerospace High Performance Center in New York City on Monday, Nov. 21. And, although she will focus on toning different body parts for each Victoria’s Secret Fashion show, her nutrition plan stays consistent.

The 35-year-old Brazilian model says that she may change what she eats, but not her overall diet. Lima’s diet is balanced and healthy because as a mom she feels it is important to be a positive example for her daughters: Velentina, 7, and Siena, 4.

It wasn’t too long ago that Adriana Lima was getting a lot of criticism for the way she used to prepare for the Victoria’s Secret Fashion show. In 2011, Lima revealed that her diet regimen included drinking only protein shakes nine days before the fashion show. She said that the diet can help her lose up to eight pounds.

Lima acknowledged that it is an intense diet, and that after the fashion show she reverts to her normal healthy diet again. Adriana Lima also prepared for the 2011 Victoria’s Secret Fashion show by working out twice daily for three weeks before the show. Here is a brief outline of Lima’s healthy diet and intense workout, the one she used to follow.

What is Adriana Lima’s Healthy Diet?

Adriana Lima used to focus on a portion-controlled diet geared toward weight loss when preparing for a Victoria’s Secret Fashion show. She is always an extremely healthy eater. Her diet includes steamed meats like chicken and nothing fried, and everything is very plain without any sauces. She also will stay away from sugars. Some of her go-to food choices included steamed vegetables like broccoli, spinach, and other dark leafy greens. She basically eats for necessity and purpose, and not for taste or social situations.

Lima’s water intake is also very important. The general recommendation for water is eight to 10 8 oz. glasses of water per day. Sometimes Adriana Lima will even indulge with some croissants, pizza, and hot chocolate.

Adriana Lima is an avid boxer, and some of her inspirations including Muhammad Ali and Manny Pacquiao. Lima says she is inspired from boxers because she understands how much work and discipline they put into the sport. Boxers must hit the gym every day, and focus on the nutrition part too.

Lima has worked with powerhouse international fitness expert Michael Olajide, Jr., who is a former champion boxer. Olajide, Jr. would help Lima get into boxing worthy shape with workouts twice a day and even days a week.
In her workouts, Lima will engage her entire body, especially her core, whether by doing jump ropes or performing a shadowboxing routine. Lima says you can do shadowboxing anywhere, including in the bathroom.

This is where she performs boxing moves in front of the mirror. To prepare for this year’s Victoria’s Secret Fashion Show, Lima will focus on a legs, buttocks, and abdominal muscles workout. The model also says when she doesn’t have a lot of time to workout, she will fit in burpees, pushups, and even a short 10-minute run.

Why does Adriana Lima put in so much effect year after year to prepare for the Victoria’s Secret Fashion Show? Even though Lima is a seasoned veteran to the annual show, she admits that it can still make her nervous because it gets bigger every year. There is still a lot of pressure on Lima, so every year she wants to look her best.

Although she is always in fighting shape, Adriana does have a ritual below every Victoria’s Secret Fashion Show. She will simply get a facial and massage to relax her nerves. She will also have a nice warm bath with dimmed lights, light a candle, and listen to classical music. This gets her nice and relaxed for a nice sleep to prepare for the big show.

Adriana Lima has been a Victoria’s Secret Angel since 2000, and is considered their longest-running model at the show. She was also a spokesmodel for Maybelline cosmetics from 2003 to 2010, and has been featured in Super Bowl and Kia Motors commercials.

Sources:
Tempesta, E., “Adriana Lima insists she doesn’t diet for the Victoria’s Secret Fashion Show because she is ‘always ready’ for the catwalk, as she reveals the workouts she uses to stay in tip top shape,” Mail Online web site, Nov. 22, 2016; http://www.dailymail.co.uk/femail/article-3960768/Adriana-Lima-insists-doesn-t-diet-Victoria-s-Secret-Fashion-ready-catwalk-reveals-workouts-uses-stay-tip-shape.html.
Aldridge, K., “How Adriana Lima Got Ready for the VS Fashion Show,” Shape web site; http://www.shape.com/celebrities/celebrity-workouts/how-adriana-lima-got-ready-vs-fashion-show, last accessed Nov. 23, 2016.