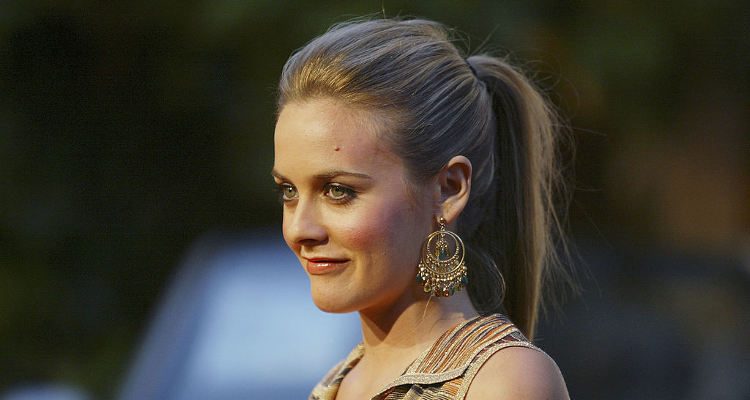 Actress Alicia Silverstone has a stunning body, that much is clear. The 40-year-old animal lover was recently featured in a PETA ad, where she urged people to boycott the wool industry and everything related to it.

In the poster, Silverstone is holding a sheep mask while exposing her butt in a forested green landscape. The photo illustrates that she would rather go naked than wear wool. The ad was unveiled in Times Square on Monday, Nov. 21.

Silverstone is a longtime spokesperson for PETA, and says she felt comfortable stripping down for the camera since it was for a good cause. Although she was shy about it, Silverstone trusted the photographer Brian Bowen Smith.

The actress says she wouldn’t appear naked in movies or on TV, but for the animals she hopes that the message is heard. According to PETA’s website, sheep are often kicked, beaten, and mutilated so that wool can be used for coats, scarves, gloves, sweaters, and boots.

Actor & bestselling author @aliciasilverstone would rather go naked than wear wool! Sheep are gentle, kind animals who are often beaten, kicked, & mutilated so their wool can be made into sweaters, scarves, & other clothing items. Choose fake, for animals' sake!

Silverstone also appeared nude in a 2007 ad where she encouraged people to become vegetarian. PETA named her the “Sexiest Female Vegetarian” in 2004. She was also published a vegan book called The Kind Diet: A Simple Guide to Feeling Great, Losing Weight, and Saving the Planet in 2011.

What is Alicia Silverstone’s Diet Advice?

What is the Kind Diet? A vegan and macrobiotic diet inspire the Kind Diet. In her book, Alicia Silverstone explains how to go vegan.

A vegan diet excludes all types of animals and animal byproducts, including poultry, meat, fish, dairy, eggs, and even honey. The diet is a plant-based eating plan that contains vegetables, fruit, lentils, beans, and grains like brown rice and quinoa. A vegan diet can help with weight loss, digestion, type-2 diabetes, and cardiovascular disease.

The Kind Diet has three phases:

Flirting: This means you are new to a vegan lifestyle and will gradually transition away from animal-based foods.

Going Vegan: This is where you are committed to a vegan lifestyle.

Superhero Phase: This is the phase where all processed food is cut from diet, and you also limit nightshade vegetables like tomatoes, potatoes, and eggplants, and also nuts, fruits, and sweets.
What are some of Silverstone’s favorite foods? Her go-to dishes include steamed of blanched greens with ume vinaigrette, mocha waffles, miso soup, sweet rice, amaranth, and apricot breakfast porridge.

How Does Alicia Silverstone Exercise?

Alicia Silverstone will sometimes put her legs up the wall, breathe, and do kegels to start her day. She always tries to get the most sleep possible, and exercises with yoga and walking. She also goes on a meditation walk, and listens to the trees, sounds, smells the air, and feels her steps. She often enjoys a boot camp exercise or some type of circuit training class.

Silverstone is also active when hiking with her dogs, gardening at home, and bouncing on a trampoline. Trampolining is a great way to boost the lymphatic circulation, strengthen muscles, and help with weight loss.

Alicia Silverstone has certainly found a diet and lifestyle that works for her, and does a great job promoting it too!