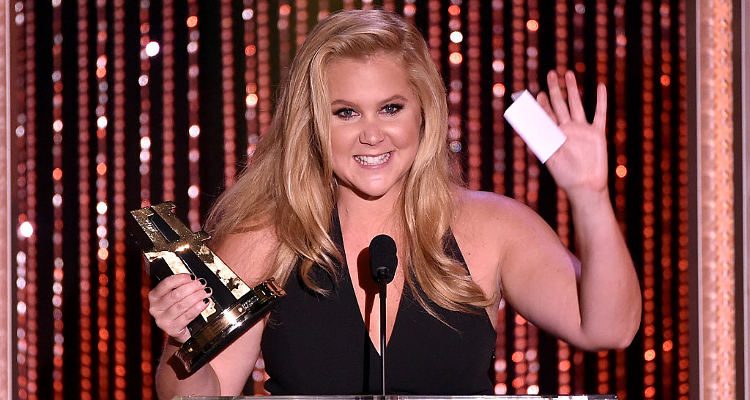 Comedian Amy Schumer posted a picture of herself in a tight mini-dress on Instagram a few days, showing fans that she could still look good when under the weather and above the average sample size. She captioned the picture with: Today’s look.

You can be sick and not be a size 2 and still feel great about yourself! #sickbutgrateful #thosesheetsdoe #ieatpastaalot. The caption also reveals to the world and fans that the actress eats a lot of pasta, something many people feel needs to be stricken from their diet if they ever want to have a chance of winning the weight game.

Schumer, 35, had to postpone her Canadian tour and a Baltimore comedy show that was planned for Saturday because, as she put it on Instagram, she feels “for reals sick.” She apologized to fans, saying, “Every night I go onstage I promise it’s going to be the best show I’ve ever done and I can’t make that promise because I feel awful and my voice is gone.”

But on Sunday, the Golden Globe-nominated actress and Trainweck star returned to social media, sharing some selfies and proclaiming she was feeling a bit better.

Today's look. You can be sick and not be a size 2 and still feel great about yourself! #sickbutgrateful #thosesheetsdoe #ieatpastaalot

The Instagram image was shared with her 5.3 million followers. Not only did she post a full-body length view of herself, but she also zoomed in on her stomach area and glutes on one shot , showing that the star really has body confidence. Of that image, The Girl with the Lower Back Tattoo author wrote: “Solution areas! Try and only be kind to yourself today. Love yourself like you’re your own mother.” She looked fit in the image.

Solution areas! Try and only be kind to yourself today. Love yourself like you're your own mother (@nikkiglaser told me that once)

Amy Schumer Is Always Active and Loves It

Earlier this year, Amy Schumer spoke out publicly about being comfortable in her own skin and happy with her size that fluctuates between a size 6 and 8. Body positivity is something the actress feels strongly about. She made it clear that she is not plus size as some media outlets had described her, and she took to social media herself to clear that up—which led to a discussion about what it means to be plus size and an average size.

Schumer trains with celebrity trainer Harley Pasternak, who also works with Halle Berry, Megan Fox, and Jennifer Hudson. Pasternak helped her get into shape for Trainwreck. He was blown away by how active she is, inside and outside the gym studio. In an interview with PopSugar, he said, “I’m very, very proud of her. She transformed herself.”

There are many ways that Schumer stays healthy and active, which makes eating pasta a lot perfectly OK because she more than likely burns through the energy she takes in. Pasta becomes a problem when it is eaten a lot but no activity is done. Then weight gain will more than likely happen.

Her workouts with Pasternak are brief, but she keeps active throughout the rest of her day. She’s always on the move and walks everywhere as opposed to having car service. When she was in college, Schumer used to be an aerobics instructor. Pasternak says that when she was training for Trainwreck, she would wear her Fitbit and walk to the studio, then go for a hike, and then walk back to her hotel. That means in the first half of her day she clocked 15 thousand steps.

Schumer’s latest project is an upcoming mother-daughter comedic film she is starring in with Goldie Hawn. The movie has no title as of yet but is set to release in May 2017.