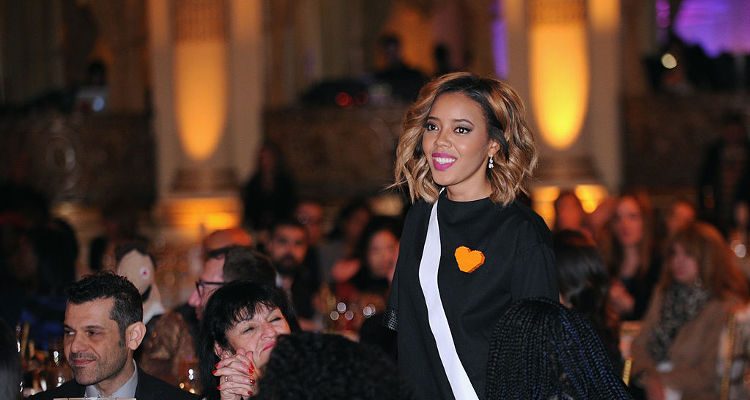 The 29-year-old welcomed her first child into the world with fiancé and Atlanta businessman Sutton Tennyson.

Just 13 days after giving birth, Simmons continued with her fitness routine at the gym with a light workout. She showed off her post-baby body in a crop top and leggings. Simmons, a social media powerhouse, shared a recent Instagram video showing off her boxing workout with a friend.

The daughter of Run-D.M.C.’s Rev. Run and niece of music mogul Russell Simmons announced the birth of her son on Sept. 29. Simmons and Tennyson recently named their baby boy Sutton Joseph.

When @sanyarichiross n I train to box together lol! We clearly don't know how to act!!! And no we didn't know how to really do the juju on the beat ha! Fun boxing session !! Thank you @itscoachnelson @supremeteamboxing ????

Angela Simmons always looks great, and the fashionista turned heads during her pregnancy with a chic and sporty maternity style. She was caught in everything from a chic white dress to a fierce black knitted dress, and even gorgeous lavender or colorful printed gowns. There was literally nothing Simmons didn’t wear.

Again, Angela Simmons’ pregnancy style also included a sporty look. The new mom says she kept active during pregnancy and enjoyed yoga on a regular basis. Simmons, along with her friend and yoga instructor, Latham Thomas, shared advice to expecting mothers. They recommend a mild physical activity such as yoga to avoid sluggishness, weight gain, and swelling in the feet and legs. Basically, yoga will help to get the lymphatic system and blood flowing.

Simmons also emphasizes that yoga isn’t for weight loss during pregnancy, but simply for staying healthy. She also says that doing yoga while pregnant taught her many things to prepare her for motherhood, including slowing down and just being still.

She also understood that it is all right to ask for support—if you need help tying your shoes, opening the door, carrying your bags, or just want your feet rubbed, ask!. The process humbled Simmons and allowed her to be vulnerable on her journey to motherhood.

Check out the rest of Angela Simmons and Latham Thomas’ tips to a healthy pregnancy below:

#Repost @glowmaven with @repostapp ・・・ Glow Tips- @angelasimmons & I are back with some reflections and glow tips for a healthy pregnancy. She's in her 8th month and starting to feel the urge to slow down. It's important to listen to and heed the body's signals. Use your energy wisely. Don't feel like completing your to-do list is some sort of competition. Take your time and make sure you have support. To avoid the sluggish feeling that accompanies the weight gain and any swelling in the legs and feet, commit to mild activity daily. It will make you feel better to get your blood and lymph flowing. Know that this time is coming to an end so embrace the fullness of your belly and also get used to asking for support- having someone hold the door open, carry your bags, rub your feet, even tying your shoe… It all humbles you and allows you to be vulnerable along your journey to motherhood. You don't have to be super woman and do it all. Release the expectations and tear up your long check lists- give yourself 3 simple tasks to concentrate on daily and delegate the rest, show the people around you how much you trust them and enlist their support so you can kick back and coast these last tender weeks. Pregnancy teaches us many things in preparation for motherhood- sometimes we just need to be still- in fact often we need to slow down and just be still- be with ourselves and take in the blessing of the fleeting moment. #mamaglow #mamaglowyoga #mindful #mamaglowmindful #prenatalyoga #angelasimmons #glowtips #wellness #wellbeing #motherhood #yogini #yoga

When Angela Simmons is not pregnant, her workout routine is very intense. She maintains her sexy curves under the supervision of personal trainer Mike T. Among her workouts includes strength training, circuit and interval training, and cardio. While weight training, she is able to lift heavy 30-pound weights.

Even on her rest days she enjoys dance, stair climbing, spinning, and yoga classes. What’s interesting is that she often doesn’t workout without wearing a waistband. Working out with a waistband will not only tone your abs, but also help give definition to the muscles

Angela Simmons complements her exercise plan with a healthy diet. For instance, breakfast for the vegetarian may include a sweet potato, egg whites with spinach, and avocado, along with a strawberry and green-grape fruit salad.

Simmons also consumes a plant-based vegan diet, which is loaded with fruit and vegetables. She fulfills her protein needs with lentils, beans, almonds, and spinach. She also supplements with vitamin B12, which is mostly found in animal sources like beef, lamb, and seafood. For snacks, Simmons consumes pistachios, fruit, smoothies, ginger candies, and granola bars: ginger in particular is great for digestion. Eating frequent meals help control her blood sugar levels and keeps her full throughout the day.

The vegan diet excludes all types of animals such as fish, poultry, and meat. Other vegan foods include quinoa, brown rice, seeds, nuts, and seed and nut-based butters and flours. A plant-based diet helps reduce the incidence of diabetes, heart disease, and cancer.