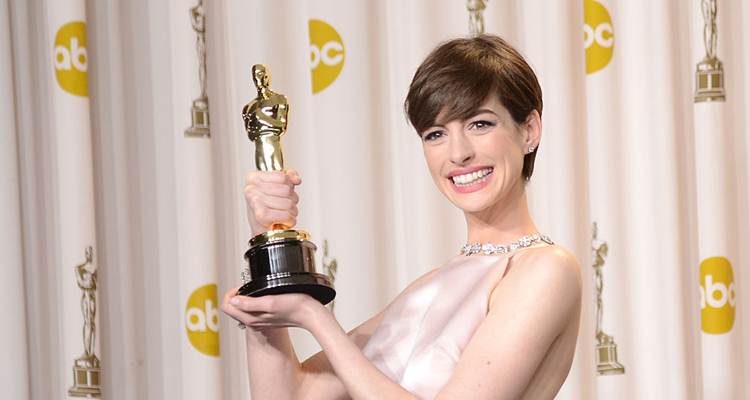 Anne Hathaway is gearing up for her role in Ocean’s Eight and in order to get fit after having a baby, she’s been hitting the gym quite regularly.

Hathaway is to star alongside Sandra Bullock and Cate Blanchett in a all-female version of Oceans 11. The new mother was recently spotted going to the gym. In order to get into great shape, Hathaway is following a vegan diet, practices yoga regularly, and does dance.

Even after having a child, Hathaway is already looking amazing and we’re sure it won’t take much to make her on-screen ready. The film is expected to be released sometime in 2018.

So far there have been images surfacing of Bullock and Blanchett filming in New York City. It seems that unlike the other films, this one may not be taking place in Las Vegas.

Hathaway is no stranger to body transformations in order to fill movie roles. For her role in Les Miserables, she dropped 25 pounds which was necessary to look like a dying factory worker. Although she endured a grueling diet and workout for that role, she does not recommend anyone else follow in her footsteps.

Generally, Hathaway eats healthy and sticks to a vegetarian or vegan diet. She mainly avoids carbs and sticks with lean proteins and healthy fats. She avoids processed foods and often consumes fresh fruits and vegetables along with smoothies. When she is looking for a treat she opts for vegan desserts.

Hathaway never really enjoyed the gym but that all changed when preparing for upcoming movies such as for her role as Catwoman. She has been known to lift weights, perform bodyweight exercises, and practice yoga. But most of all, in order to stay lean, she loves to dance.

If you’re looking to follow in her shoes, you may want to try a Zumba class and shake it for a solid hour. Not only is it great cardio but it’s super fun, so you won’t even realize you’re working out.

Getting older has also been a push for Hathaway to be fit and healthy. Now that the mother-of-one is in her 30s, she has a greater love for herself and her body. In interviews, she has said that she feels much prettier now that she is in her 30s than she did before.

Now that Hathaway has had a child, it may be more difficult for her to drop those extra pounds. The good news is that she isn’t putting additional pressure on herself and taking the process day by day. In fact, she has offered up some inspirational advice to other mothers.

She took to her Instagram and wrote the following beneath an image of cut jeans. “There is no shame in gaining weight during pregnancy (or ever). There is no shame if it takes longer than you think it will to lose the weight (if you want to lose it at all).

There is no shame in finally breaking down and making your own jean shorts because last summer’s are just too dang short for this summer’s thighs. Bodies change. Bodies grow. Bodies shrink. It’s all love (don’t let anyone tell you otherwise.) Peace xx #noshame #lovewhatyouhavebeengiven.”

There is no shame in gaining weight during pregnancy (or ever). There is no shame if it takes longer than you think it will to lose the weight (if you want to lose it at all). There is no shame in finally breaking down and making your own jean shorts because last summer's are just too dang short for this summer's thighs. Bodies change. Bodies grow. Bodies shrink. It's all love (don't let anyone tell you otherwise.) Peace xx #noshame #lovewhatyouhavebeengiven

We’ve watched Hathaway grow up on the big screen from being an “ugly” princess to a superhero, to now potentially playing a thief. Although scenes of Anne Hathaway for the upcoming Ocean’s Eight movie have not been revealed or shot yet, she is clearly getting a head start in looking her best in the upcoming role.