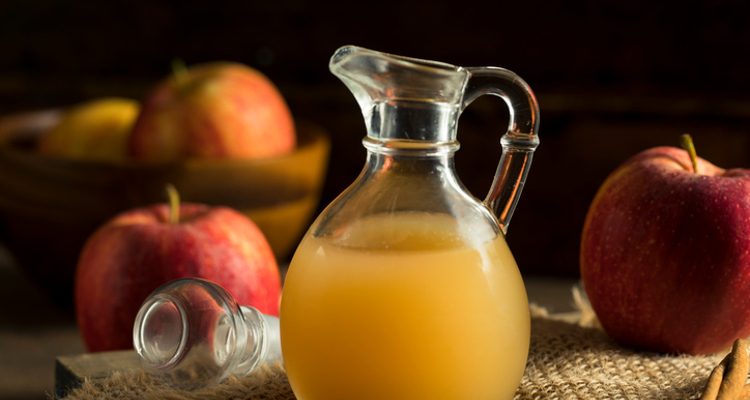 Apple cider vinegar is touted for a number of uses. There are claims that it can help everything from acid reflux to weight loss.

Side Effects of Drinking Too Much Apple Cider Vinegar 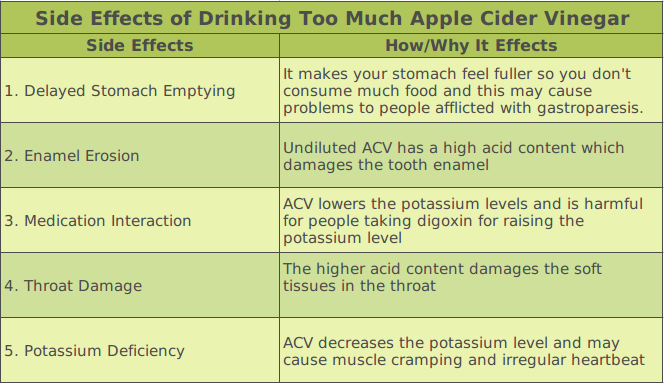 With all of the health claims that revolve around apple cider vinegar, some people might be tempted to overdo it. Apple cider vinegar helps with weight loss? Well, maybe I should just chug this entire bottle and that will do the trick! Unfortunately, that’s not the case as drinking too much apple cider vinegar might do more harm than good.

There is no standard recommended dosage of apple cider vinegar per day, but many experts suggest no more than 2 tablespoons daily to ward off harmful side effects.

For example, these are some of the apple cider vinegar side effects that you may want to look into:

One of the reasons why weight loss may occur with ACV consumption is that it helps make your stomach feel fuller so you don’t consume as much food.

Unfortunately, that is partially due to the fact that apple cider vinegar has been shown to delay the emptying of the stomach. This can also cause major problems with people afflicted with gastroparesis, a condition that is often linked to type 1 diabetes.

Apple Cider Vinegar’s side effects on teeth are due to its acid content, which may cause enamel erosion in your teeth if taken for long periods.

It’s also dangerous for those using diuretics as they are already prone to have low potassium levels. In such cases, seek your doctor’s opinion if you have to consume apple cider vinegar daily.

Apple Cider Vinegar has side effects on the throat, as it has the potential to damage your throat tissue if consumed in excess quantities.

At the end of the day, apple cider vinegar does have an acid content and acid can do damage to soft tissue over an extended period of time.

As mentioned, apple cider vinegar can lower potassium levels, which can be beneficial to those with excessive amounts of the mineral, but if those levels get too low other issues can occur like muscle cramping and irregular heartbeat.

Depending on the length of time these levels are low, you may also develop osteoporosis. It may also affect bone density and the formation of new bones.

There are a number of other facts you should be aware of before using apple cider vinegar as a health or diet method:

1. The first and main thing is that apple cider vinegar is not a magical weight loss substance. Most of the attributed weight loss effects could be temporary and come with certain health risks. Also, weight loss could happen over a period of time and not overnight.

If you have a history of medical problems tied to diabetes or low potassium, consult with your doctor before taking apple cider vinegar. Nothing can take the place of a healthy, well-balanced diet and regular exercise for at least 30 minutes, five days a week.

The acetic acid in the drink may fight against harmful bacteria that lead to the condition and may also treat low stomach acid by introducing more acid to the gut.

This can also help prevent urinary tract infections. Note: while this may prevent kidney issues, you should not take apple cider vinegar as a cure for any kidney or urinary tract problems you may have.

4. There was also a study published by the British Journal of Nutrition in 2006, which showed that apple cider vinegar may lower cholesterol. In the study, it lowered the cholesterol and triglycerides in rats that were fed a high-cholesterol diet.

The study did show an improvement, which may bode well for apple cider vinegar’s effects on human cholesterol.

With the positives, remember, there are a number of possible negatives. The best person to ask if apple cider vinegar is right for your health and diet is your doctor.

Apple Cider Vinegar: Not All It’s Cracked up to Be

In excess, apple cider vinegar can do damage to your stomach and bones and may interfere with medications that you are already taking for other issues.

It may lower your potassium levels to a point where it could be harmful to you. However, apple cider vinegar can also be useful. It may lower cholesterol, help with kidney function, and, weirdly, it may help with acid reflux.

The thing to remember is there is no instant way to better your health or instantly lose weight. While apple cider vinegar may be a little helpful, it also has multiple side effects. It also does not help with weight loss in a significant way. If you wish to use it for its other possible health benefits, consult your doctor first.