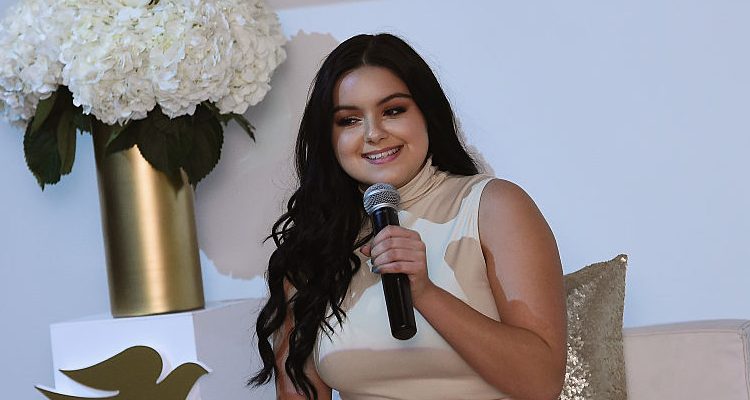 Ariel Winter has headed to warmer climates and is currently enjoying the sun and sand in favorite celeb spot Cabo San Lucas, where the actress is kicking back with friends, including actor Levi Meaden. Winter posted an short video of herself to Instagram showing fans how fit her bikini body is. “Caboooo it’s lit, [sic]” is how the Modern Family actress, 18, captioned the post.

Winter underwent breast reduction surgery last year and went from a size 32F cup to a 34D. She made the decision because she was uncomfortable not only physically but with all the unwanted attention she received. In 2015, Winter, who also does the voice for the title and main character in the Disney Junior TV series Sofia the First, won her case against her mother seeking legal emancipation. The young actress has gone through quite a bit in her life, so she has tons to be thankful for and deserves that vacation.

Winter told Seventeen magazine in an interview for their November issue that “it’s definitely hard being self-conscious and having the world be able to tell you how they feel about you.” Before Twitter and Instagram, she says that if you felt a certain way about someone you didn’t know, you couldn’t tell them. “Now I wake up and I have tweets to me about how I’m a fat, ugly blah-blah.”

Since being freed from her mother’s custody, Winter now living with her sister and her family. Winter leads a much healthier lifestyle, and that includes paying attention to what she eats. The star’s mother reportedly forced her to eat only egg whites and raw vegetables in an attempt to keep the young star’s weight under control.

The actress follows a portion-controlled diet for every meal she eats. She eats nutrient-dense foods, such as vegetables and complex carbohydrates. Fiber sources are whole-grain cereal and wild rice. To get the protein she needs, Winter regularly eats chicken and fish. Her water intake is important to her, so she tries to have at least three liters a day. She also believes in the health benefits of garlic, which is known to keep the immune system strong. One thing she loves to have every day is an iced coffee.

Winter’s works out regularly, but likes to go hiking as well. The gym isn’t the only place where a great workout can be had, and Winter knows this. The star likes to work out with celebrity trainer Gunnar Peterson, who also works with Jennifer Lopez, Angelina Jolie, and Winter’s Modern Family costar, Sofia Vergera. Winter posted a video on Instagram a few months ago of herself working out at the gym; the caption said, “when you can’t see @gunnarfitness on a Monday…? / #justworkinonmyfitness @laurent_claude_gaudette. [sic]”

Together, as part of their workouts, they do weight lifting, cardio, and lots of lunges and squats, which all help shape Winter’s firm and shapely backside, which she has no qualms showing off in racy photos.

Petersen also offers clients diets tips because exercise and a healthy diet go hand in hand and are the two parts to getting in shape and staying that way. He says to stick to foods as close to their natural state as possible and to eat vegetables and protein in the evening but have no carbs at that time. Save carbs for during the day when they can be burned off.

Mazziotta, J., “Ariel Winter Is Up in the Gym Workin’ on Her Fitness with Her Boyfriend,” People web site, March 8, 2016; http://www.people.com/article/ariel-winter-workout-instagram, last accessed November 16, 2016.