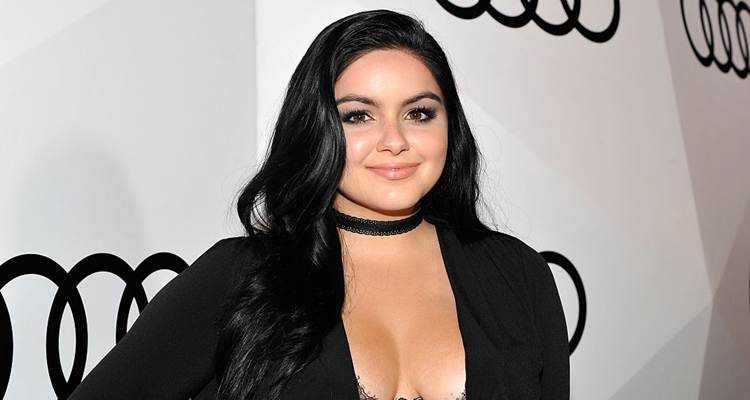 Actress Ariel Winter’s preparations for Halloween 2016 are in full swing. She recently posted  a pic of a spooky Halloween pumpkin on Instagram.

Wifey and I carved our pumpkin #minions

The Modern Family star also appears on the November Seventeen magazine cover and is very excited to reveal it to her fans. She glitters in her cute little dress with her beaming smile.

I’m completely honored to be on the cover of @seventeen ! Inside the issue, @seventeen and @instagram celebrate self-acceptance and body confidence with their #PerfectlyMe initiative. Get inspired and join the movement by posting a photo or video of you, your friends, or anyone that inspires you to embrace yourself and feel #PerfectlyMe

She had body insecurities at a younger age; she had large breasts that caused a lot of back and neck pain.  She had a breast reduction surgery last year when she couldn’t find a bathing suit that fit her one day.

Though she did not feel confident from within, she tried her best to look confident at red carpet photo shoots. Her weight dropped down and her bra size reduced from 32F to a more manageable 34D.

Ariel told Refinery29, “Over the years, I had some really great role models. I worked with Sofía Vergara since I was a young girl and she helped me navigate being a curvy woman and being proud of it. My sister was always confident in herself, too, and I always aspired to be like that.”

She further said, “Through a lot of amazing women, I definitely started to change my opinion. I started to tell myself, ‘Well, it didn’t work to change yourself into what they wanted, because at the end of the day people are gonna say what they want regardless. I should just be what makes me happy, and that’s it.’” Winter has undergone many changes including her diet and workout.

Winter is not as slim as the other actresses but looks fit and confident. She lives a healthy lifestyle, which is a balance of workout and nutritious food. She treats herself to indulges but in moderation. She practices portion control and takes vitamins and minerals to keep her fit. Winter consumes complex carbohydrates and fiber-rich foods like whole grain and rice.

She loves to eat chicken and fish, which are her sources of protein. The star drinks three liters of water every day to flush out the toxins from her body and keep her hydrated.

Winter worked hard on her fitness with her ex-boyfriend Laurent Gaudette. The star posted a video on Instagram doing squats.

She works out with the Kardashians’ personal trainer Gunnar Peterson. She is often seen working out and once she was spotted near her friend’s house. She wore a black sports bra and yoga pants and paired it with blue trainers.

”I have felt more happy with myself than I ever have,” the 18-year-old actress told Glamour last August. She says she can wear dresses of all styles and doesn’t have to think about slipping into the tightest dress.

She actively stands up against body shamers and shares body-positive posts on social media.

Winter believes we must love ourselves for who we are and know his worth. She receives a number of comments on her outfits but doesn’t let the comments affect her. Her twitter picture reveals the same.

Embrace all that you are. Don't let those outside voices become your inner voice #mychoice #loveyourcurves pic.twitter.com/KgIJq1WQQe

Winter plans to become a social justice lawyer. “Social justice just feels like it fits for me,” Ariel told People in January. ”I want to continue acting and also go to law school. I think the more knowledge you have, can only better your life.”