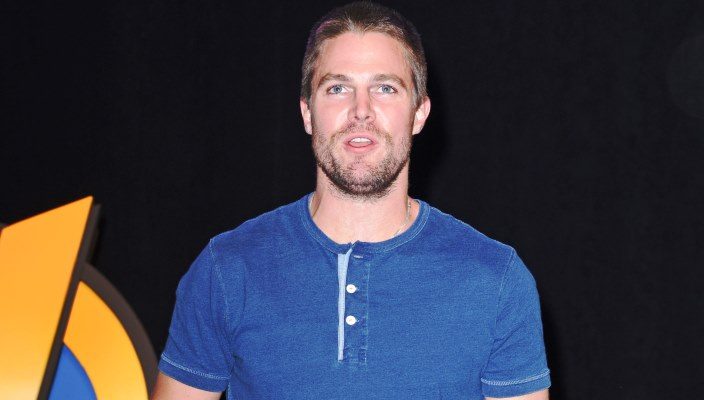 The 35-year-old Amell loves performing many of his own aerobatic stunts for the show. Arrow stunt coordinator J.J. Makaro says Amell learned military-style training technique parkour before the series began, allowing him to take on many of the show’s stunts. Amell’s dedication to the discipline has pushed the show’s stunt crew to test the limits.

Amell often engages with his fans on social media via Facebook and YouTube. The Arrow star has shared several videos of his unique exercise routine over the years, featuring Amell getting a ton of air with some crazy jumping exercises.

Check out a few more Stephen Amell workout videos below:

It takes a lot of talent to play billionaire Oliver Queen on screen. At 6’1 and 185 pounds, Amell not only has rock-hard six-pack abs, he also has a sculpted back and chest, and bulging biceps.

However, as evidenced by his workout videos, you don’t need to work out in the gym to stay in shape like a superhero. Amell’s Arrow workout uses different types of bodyweight training. As a result, his workouts are constantly changing. In fact, Stephen Amell doesn’t work out in a gym and will basically do what he wants to prepare for the role.

Stephen Amell will often begin his workout with a warm-up technique known as myofascial release, often done with a foam roller. The workout mostly contains parkour and body weight exercises.

The workout is so intense that he can get away with doing it three to four times per week. He also has active recovery days dedicated to mixed martial arts training, like jiu-jitsu and kickboxing, and also archery.

Stephen Amell was also required to stay in shape for the role of Casey Jones in Teenage Mutant Ninja Turtles: Out of the Shadows. Amell’s diet has to be on top of its game at all times. What is Stephen Amell’s diet?

For one thing, Stephen Amell’s diet has an increase in calorie consumption and fat intake. Amell’s diet also has a lot of protein and a reduction in carbs. This helps promote muscle growth while using fat as an energy source instead of carbs.

That being said, the type of calories and fat definitely matters to Amell. He gets 20 percent of his calories from fat sources like olive oil, avocados, and coconut oil.

He focuses on getting adequate protein to build muscle. Some good sources include meat, poultry, fish, beans, and eggs. Whenever Amell is hungry he will also eat a healthy snack instead of a large meal.

Now, do you have what it takes to workout and eat like the Green Arrow?