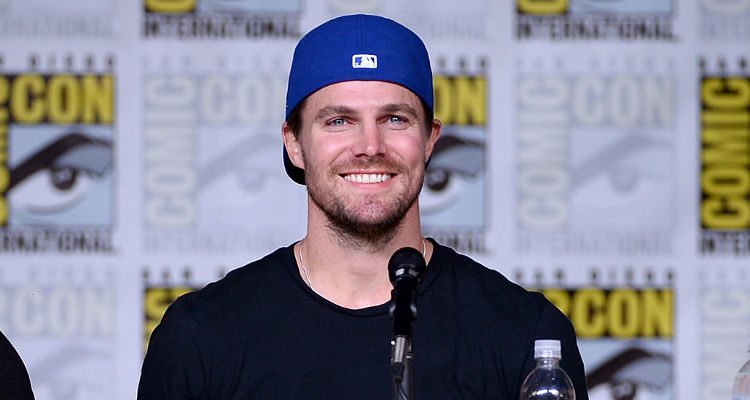 Arrow star Stephen Amell is looking super fit as Oliver Queen in Season 5’s new suit. So, what are the actor’s fitness secrets? We have the scoop for you below.

Amell has to be in incredible shape for his role in Arrow, so he needs to follow a certain diet and workout regimen. For starters, his diet must contain enough calories to cover the amount he burns in his workouts.

However, it’s not just empty calories he consumes. He eats specific and quality calories to ensure that he’s creating lean muscle: these are clean and healthy calories.

When he’s hungry on set, he eats healthy snacks to keep his metabolism up and running instead of consuming a big meal. This gives him fuel without the heavy feeling of eating a large meal.

Amell’s diet is free from processed sugar, dairy, gluten, and beer. He eats close to a gram (anywhere from 0.7-1 gram) of protein per pound of bodyweight. Some protein choices are eggs, beans, fish, poultry, meat, and whey protein powder. He also gets around 20% of his calories from healthy fats. Apparently, dietary fat helps to boost testosterone, regulate hormones, and keep one satiated. Healthy sources of fat are avocados, coconut oil, steak, as well as omega 3’s found in fatty fish, nuts, seeds.

Some of the small, healthy snacks that Amell chooses to keep his energy levels up might include fruits, veggies, nuts, seeds, or even a protein shake.

Amell likes to work out with a lot of weight exercises. Remember that he does all his own stunts on Arrow, so he needs to keep strong, stay fit, and train hard for the show. He likes to incorporate a lot of variety into his workouts so that he doesn’t get bored. He exercises three to four times a week, which is not what some other celebs may do—Amell’s workouts are quite intense so he doesn’t need more than that.

One thing Amell loves to do a lot of is something called Parkour. Although this is not the best way to build muscle, it definitely helps with burning fat and is a great source of cardio.

Amell also likely does tons of weightlifting and strength training. All of these types of workouts in combination with his diet gives him the sexy and incredible physique he’s known for. You can follow Stephen Amell on Instagram to catch even more photos of him slipping back into his Arrow suit for the new season.