Home > Food Facts > Pepperoncini vs. Banana Peppers: What Is the Difference between the Two? 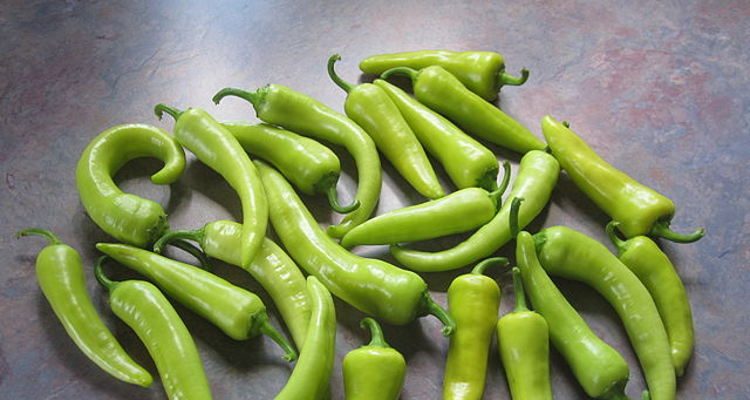 Banana peppers are often confused with pepperoncini or pepperoncino peppers. Although both come from the same species called Capsicum annuum, they have some key differences. We will do a banana pepper vs. pepperoncini comparison so that you can use them wisely and properly in cooking to get the required flavor and taste.

The hotness of a pepper is measured in Scoville heat units (SHU), which is simply a measurement of sugar water. The Scoville Organoleptic Test measures chili heat by figuring out how much sugar water is needed to dilute a chili pepper mash to get to the point where you no longer feel the heat of the chili.

When banana peppers and pepperoncini are compared on the SHU scale, they measure up pretty much same. So, it’s no wonder they are interchangeable by many.

The banana pepper scores between zero and 500 on the SHU scale, whereas the pepperoncini scores between 100 and 500. So, there is just 100 points difference between the two in terms of heat.

The subtle difference, however, is that the banana pepper can dip to a zero heat while the pepperoncini cannot. The lowest heat measurement is 100 on the SHU.

It is often beyond the comprehension of many that these two chilies are so strikingly similar in their looks as well. How then, can they be differentiated?

The key is to look at the skin. The banana pepper is smoother and looks like a banana’s skin, while the pepperoncini’s skin is wrinkly and has bends and pocks which are missing in the former. Also, the banana pepper has a thicker skin.

The other difference that is hard to notice unless you are a trained observer is the end of the peppers. The banana pepper tends to be pointier, and the pepperoncini is more bulbous at the end.

The two types of peppers can be easily differentiated by their taste.

Banana peppers are mild, sweetish, and tangy. Pepperoncini peppers are sweetish and mild, but slightly bitter. They lack the tanginess.

Pickled peppers are salty, and come in either mild or hot varieties. Whether you use them fresh or pickled, both of these peppers can easily be included as pizza toppings or as ingredients inside a sandwich or a sub.

Banana Peppers vs. Pepperoncini: Which Is Healthier?

To understand which is healthier of the two, let’s look at the nutritional values of both banana peppers and pepperoncini.

As we can see, they are almost comparable in their nutritional value as well. The health benefits are limited as they are usually consumed pickled.

Since they are low in fat and rich in vitamins and minerals, banana peppers are a part of many weight loss diets. Also, the capsaicin contained in them is known to promote weight loss.

Pepperoncini offers similar health benefits. But the pickled versions, which are high in sodium, are more common for consumption. This can affect heart and kidney function, as well as blood pressure levels, so they must be consumed in moderation.

How to Pickle Banana Peppers and Pepperoncini

Pickling these peppers can give you a satisfying and tasteful side dish. The main difference in the pickling is that banana peppers are sliced before pickling, while pepperoncini are pickled whole.

You can try out this simple pickle recipe using the pepper of your choice.

Sterilize the jars properly in boiling water. Drain the jars of any excess water.

Wash peppers in cold water and dry them well. Then, add the oil, vinegar, and water with salt. Boil this solution, and keep the heat on for some time.

Add blanched garlic cloves in the jars. Slit each pepperoncino vertically and add them to the jars (or sliced banana peppers).

Pour hot liquid over the peppers allowing slightly more than half an inch of head space. Then, carefully pour one tablespoon of olive oil into the jars without getting any on the lid.

If you want, keep the jars in boiling water for about 10 minutes.

Store in cool, dark place. The pickled peppers will be ready to eat in about three weeks.

Whether pickled or fresh, banana peppers and pepperoncini surely add a zing and a tang to the food we eat. In addition to being helpful in weight management, these peppers are also rich in antioxidants, so they are a healthy option as toppings or fillings.

Consuming them in the right quantity is suggested as the pickled versions are high in sodium and sugar, which may be harmful to your health. One of the best ways to consume them is by simply adding a few of them to pasta and salad dishes.