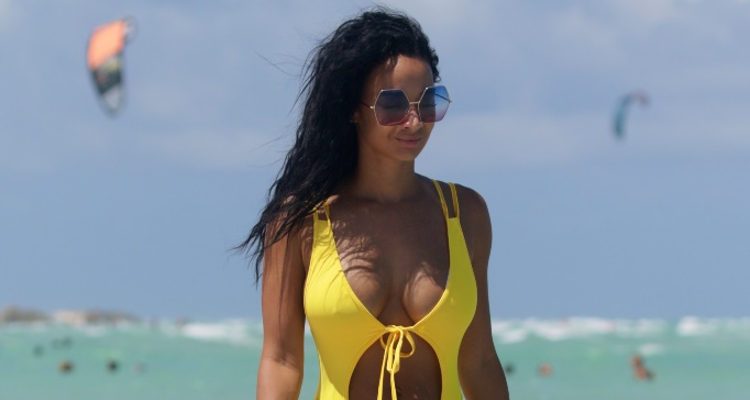 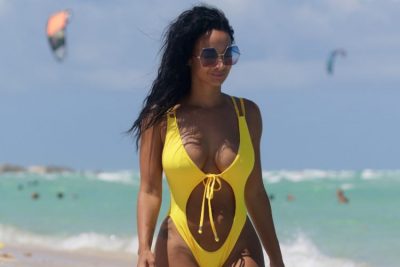 Draya Michele, a reality television personality who starred in the show Basketball Wives LA, credits daily workouts and using lemon instead of sodium for her post-pregnancy bikini body. She gave birth to her son Jru in April.

This week, she’s on a Miami beach (South Beach, to be precise) to promote her swimwear line, Mint Swim, at Miami Swim Week taking place this Sunday. She was photographed on that Miami beach wearing one of the swimsuits from her line: a bright yellow one-piece with a cut-out in the front to expose her flat stomach. It’s the perfect piece to show off the hard work she’s put into getting her body back in shape after giving birth a few months ago.

The Basketball Wives LA star says she had to work out five days a week at the gym doing a lot of cardio and dieting, but mostly cardio. She admits that losing the baby weight was hard because the body goes through so many changes. Michele made a good choice in removing sodium from her diet and replacing it with lemons, because excess salt can bloat the body and cause puffiness and even weight again.

To get a bikini body, cutting back on salt is a good decision, but remember the body does need to have some salt (sodium is an electrolyte), so removing it entirely can be dangerous. The trick is to avoid adding extra salt at the table to dishes, and to also remove processed foods and junk foods from the diet. Eating fresh fruits and vegetables, and lean proteins, and combining them with regular workouts will also help with getting a beautiful bikini body after pregnancy, much like the one former Basketball Wives LA star Draya Michele displayed on a Miami beach.