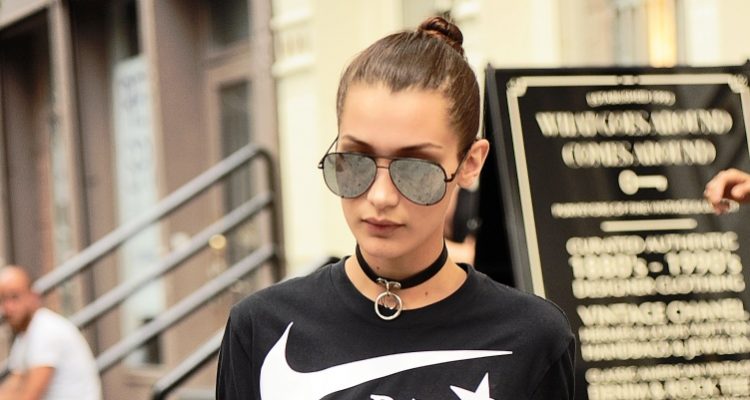 Millions of fans are geared up to tune in to the Victoria’s Secret Fashion Show, which will mark its 20th anniversary in the fashion capital of the world, Paris, on Monday, December 5, 2016.

Supermodel, Bella Hadid, is surely excited to walk the catwalk this year at the event as confirmed by her Instagram feeds. For example this post which she captioned, “We’re ready!!!!! Let’s gooo beautiful ladies!!!! @victoriassecret #VSFS2016 Coming for you Paris!!!”

The pic shows Hadid along with models, Kendall Jenner, Lily Donaldson, and Joan Smalls, donning pink tees with the words, “Victoria’s Secret Paris 2016.” The models are seen holding French flags and Eiffel Towers, looking all excited to board their flight to Paris.

The Teenage Mutant Ninja Turtles: Out of the Shadows star, Ambrosio, Instagrammed, “Taking off …. ✈️ next stop #Paris #vsfsparis16.”

The Angels have been on a rigorous workout regimen which has been followed religiously by fitness fans. You can follow hashtag #TrainLikeAnAngel and learn more about their workout regimen.

This is one of the sexiest shows in the world, and the brand will ensure that it is a memorable show for their 20th anniversary. The models will be cat-walking and there will be live music performances.

It is amazing to see how stunning Hadid and Ambrosio look. Are you curious to know how they maintained their fitness? Keep reading to find out how they stayed in shape with #TrainLikeAnAngel.

Hadid is a huge fan of cardio exercises and likes to run, practice yoga, do Pilates. She also enjoys walking around in New York. The 20-year-old has worked hard to earn her spot as an Angel in the 2016 Victoria’s Secret Fashion Show.

The supermodel posted her boxing workout video clip and said, “Boxing intervals during our 2 hour training this morning! Strong and happy ! Thank you @gothamgym”

Boxing intervals during our 2 hour training this morning! ?? ??Strong and happy ! ❤️Thank you @gothamgym @nike @victoriasport

Hadid has been working out at Gotham Gym in New York. In the video, she can be seen doing a rigorous workout which includes cardio and boxing intervals. After her boxing workout, the star performs squats and stretches with the assistance of her trainer, Rob Piela. Her rigorous exercise regime has helped her achieve a well-toned and super fit figure.

The supermodel admits that she isn’t able to follow a healthy diet for very long stretches. She likes to drink green juices once a week. She loves to have pizzas, burgers, grilled cheeses, french fries, and diet coke.

For the Victoria’s Secret show, she told Hello! Magazine, “But I think that if you just stick to something you can really achieve so much. I’ve been eating hard protein every day, and working out for three hours every day. It’s crazy but I think that you know if you set your mind to something I think you can succeed.” This shows the model’s determination to stay in shape for the event, and is a noteworthy message for all fitness fans.

Ambrosio is sticking to an intense workout and diet and which has helped her achieve an enviable physique.

She told E! News, “You’ve just got to put your mind [to it] and work out really hard, extra hard. It’s always hard when you have to diet and work out and just put your mind in it.” The supermodel likes to follow the Tracy Anderson workout method.

Ambrosio was trained by fitness trainer, Leandro Carvalho, who helped with workouts which shaped her glute muscles. She exercises with elastic bands for her glutes workouts. She also does Brazilian dance, cardio, and Capoeira, which is Brazilian martial arts combined with dance and music.

To stay in shape for Victoria’s Secret, the model said that healthy eating and keeping hydrated is important. She added, “Thanksgiving is just before we film the show so we just try to be as healthy as we can and work out.”

She likes to have eggs with bacon for her breakfast. She may include sandwiches, bagels, bread, and fruits. Her diet plan includes a lunch consisting of salad, chicken breast, rice, or beans. Dinner may include lobster ravioli, salami, caviar, sweet potatoes, and mushrooms.

The annual 2016 Victoria’s Secret Fashion Show is all geared to feature the stunning Angels. Fitness fans can try and adopt supermodels, Bella Hadid and Alessandra Ambrosio’s approach to fitness to stay in shape.