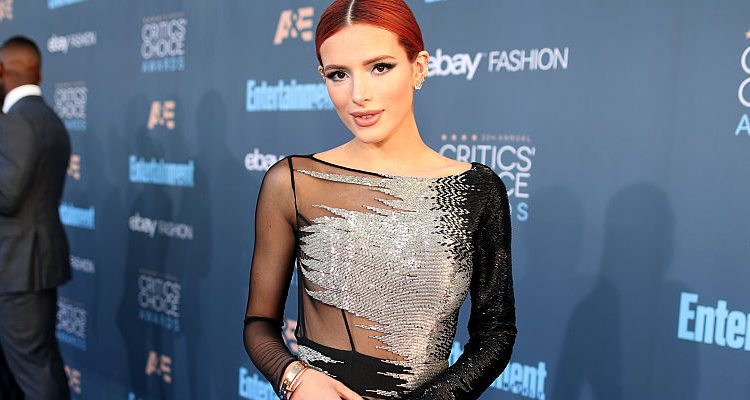 Hard work and dedication pays off for former Disney star Bella Thorne as seen in recent holiday photos with her sister, Dani. The 19-year-old welcomed the New Year with friends in the Bahamas while documenting her sunny vacation with Instagram and Snapchat postings of her bikini body. Several pictures show both girls posing with baby sharks and pigs while wearing tiny string bikinis.

Enjoying the sun, sand, and heat, the sisters turned heads as they explored the famous tourist site at Big Major Cay, otherwise known as Pig Beach. Younger sister Bella Thorne even sported a pair of white Sunday Somewhere glasses, a favorite among celebrities.

Island girl ??? #beach #vacation #mondayvibes #NYE fun fact! I tripped and landed right on my face after taking this photo

Want to get to know this actress a little more? Well, here’s a rundown.

Bella Thorne was born October 8, 1997 in Pembroke Pines, Florida, to mom Tamara Thorne and Cuban father Delancey Reinaldo “Rey” Thorne. She is baby sister to three siblings: Kaili, Danielle, and Remy. Sadly, her father died in a motorcycle accident when she was only 10 years old.

Thorne got her acting start in a small role in 2003 in Stuck on You. Since then, she’s appeared in many movies and TV shows, including Entourage, The O.C., Dirty Sexy Money, My Own Worst Enemy, Big Love, Shake It Up, Frenemies, Blended, Alexander and the Terrible, Horrible, No Good, Very Bad Day, The Duff, and Boo! A Medea Halloween.

In 2010, she release her first music single, “Watch Me,” and in November 2014 she released an EP, titled “Jersey”, with her single “Call It Whatever” spending 10 weeks on the Billboard Hot Dance Club Songs chart. It’s also reported that Thorne has signed a deal to write a series of books, with the first one titled, Autumn Falls.

So, how does Thorne get her very trim figure and fabulous abs that make her look so good in a bikini?

In an article with Allure magazine in 2015, Thorne stated she didn’t use cardio. At the time, she was concentrating on weight lifting and circuit training. Over the past year, Bella Thorne has been sharing her exercise workout tips with her social media followers through various routine poses and eating tips. She recently posted an Instagram picture of her intense boxing workout routine. Other celebrities using the ultra-physical sport for keeping in shape include Gigi Hadid and Adriana Lima.

Love getting our boxing on? feel like my bro!! But like I'm not very good and he's amazing soo… #mondaymotivation #mondaymorning

The young American actress and singer has transformed her body into a lean, tone shape with the help of her fitness routine and her sister.

“I am looking to build lean muscle with aerobic conditioning. My workout consists of an hour and I always make time for proper stretching before and after my workout,” says the young starlet.

Key warm-up moves help Thorne work through a series of planks, viper wood chops, and suspension band exercises. She targets her core muscle groups as well as her arms and waist. Other areas of concentration include her calves and glutes. One of her go-to routines begins with the elliptical to warm up her muscles before moving into squats. Thorne increases the intensity of this program with the use of weights.

As some of the exercises do not need equipment, Thorne says much of her workout can be done at home. She even enlists the help of her sister Dani in some of her routines.

While maintaining a regular fitness program has helped her reach her goals, Thorne admits she is also focused on what she puts in her body. Her protein diet includes fruit-infused water, Greek yogurt, and boiled eggs.

Thorne has been spotted on many occasions enjoying the organic juices of Jamba Juice after an intense workout.