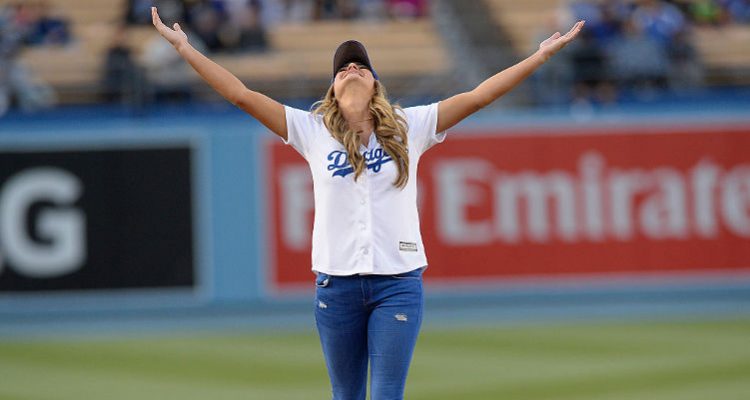 Ben Higgins and Lauren Bushnell upset their fans after they finally called off their wedding on the Ben & Lauren: Happily Ever After? show. We now speculate the couple headed for a split.

Hollywood Life reported that Higgins confessed that he and Bushnell still have a lot of things to work out in their relationship. Despite spending months together, he doesn’t want to rush into exchanging vows. That being said, Bushnell feels Fletcher is driving her fiancee crazy with her sizzling bikini body and charming looks. Reports claim that Higgins postponed their wedding because he is obsessed with the Bachelorette star and still has feelings for her.

The gorgeous beauty, Fletcher, undoubtedly has a svelte figure and killer looks enough to make folks run behind her.

Despite the hustle and bustle of wedding preparations (the date hasn’t been disclosed yet), Fletcher ensures she hits the gym regularly to keep glowing and to stay healthy. Apart from working out, her other beauty secret includes a nutrient-rich diet. She sticks to a lot of clean, healthy foods and prepares the majority of her own meals to avoid excess junk.

With her increasing age, she is concerned about eating out daily and thus relies on home cooked meals. Take-out and restaurant foods have high amounts of sodium, fat, calories, sugar, and other preservatives and additives, which harm the skin and is also nutrient-deficit. She prefers grilling a piece of chicken and steaming some broccoli rather than eating out. It provides her with proteins and fiber as well.

Fletcher loves Mexican food and keeps away from dieting. She admits that due to her love of food, it’s sometimes hard to diet. “Dieting is hard for me,” Fletcher told US Weekly in their June issue. “I love food too much … I love Mexican food and truffle mac ’n’ cheese — anything cheesy!” Apparently, she makes amazing quesadillas with healthy and fresh ingredients.

Fletcher discussed her wedding with US Weekly saying, “I am big on floral arrangements but also, and this is crucial, a late-night Chipotle mini burrito bar for guests as they are leaving.” Though she might indulge on her special day, she usually sticks to a healthy lifestyle. She doesn’t refrain herself from indulging, but makes sure she balances her indulgences with rigorous workouts.

JoJo Fletcher loves outdoor workouts like running in the park with her dog, Jackson. She feels it is a good way to burn calories and have fun with him. She works out with weights ranging from 10 to 12 pounds and prefers use of weight machines as they help her to move her body correctly. She has always been active—since her childhood—and loved playing basketball, volleyball, and running track.  She told US Weekly she works out few times a week and does cardio like spin classes or StairMaster.