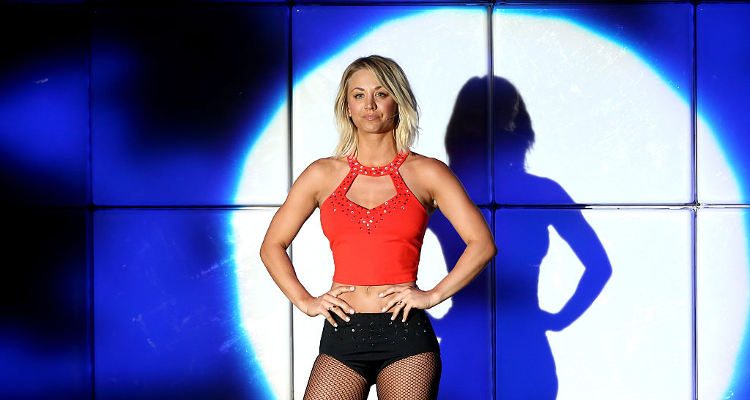 Big Bang Theory’s Kaley Cuoco has some of the best abs in the business, and she flaunts them every week on her show, though lately her character has been wearing loose blouses as opposed to the cropped shirts her character wore in earlier seasons.

The actress has been spending time these days with her new boyfriend, Karl Cook, an equestrian, whom she met at a horse show. Cuoco is an avid equestrian herself and their love of horses is a common interest. But in between new loves and old sitcoms, this star keeps an active life that includes yoga class, and lots of them, which makes eating plenty of Thanksgiving food possible—and less guilt inducing.

In an interview with Entertainment Tonight, Cuoco said that “I only go to yoga to drink wine, so I’m good. I just throw the calories right back in.” On Tuesday, the actress was seen leaving a hot yoga class, one that lasted for two hours.

She credits the discipline for her toned body. “Yoga is the secret,” she told ET. “Yoga is the reason that I have been [looking great]. It has done everything, mentally and physically. I love it.”

Hot yoga has added benefits thanks to the hot room it’s done in—the biggest benefit of which is detoxifying because toxins leave the body through the sweat that is produced.

The same effect can be achieved in a sauna. Some people can’t handle that aspect of hot yoga, but if well tolerated the benefits are worth it. Clearly, Cuoco has zero issues doing yoga in what can sometimes be a sweltering environment.

One of her other loves is horse riding, and it is what lead her to her current boyfriend. Most days after shooting for the sitcom, she heads to the stables to spend time with her horse Falcon. Of her time with Falcon, she says it is the perfect combination of a mental and physical workout because after an hour of riding, she is exhausted. Her legs and core in particular are sore. She tries to get an hour ride in four times a week.

After her horse riding session, Cuoco will then follow-up with a gym workout, but because she’s tired of the regular gym scenario, she has switched to doing spinning classes, and tries to get to those classes three times a week. Her legs must be rubbery after two hours of leg intense activity!

Even though the actress follows a healthy diet, she does have a craving for diet cola, which she drinks every day. She is trying to limit her cola intake, and that is helping her appreciate it more. Most of the food she eats she prepares herself with fresh ingredients bought at Whole Foods. One of her favorite breakfasts is a simple medley of granola, fruit, and skimmed milk.