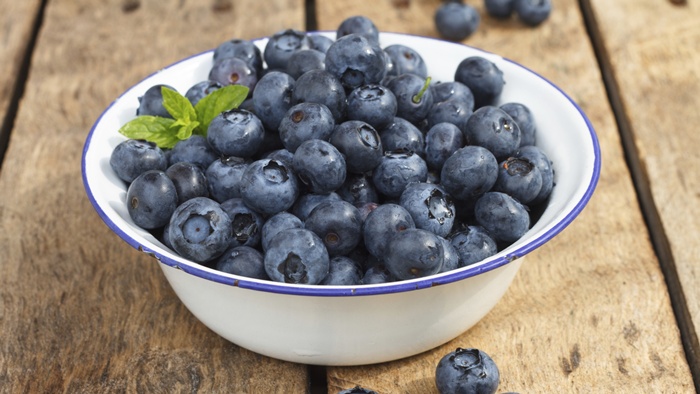 The blueberry is colorful, tasty and very high in antioxidants—great for warding off all that ails you. If you are feeling a cold or flu virus coming on, a handful of blueberries is loaded with vitamin C. In fact, one serving of blueberries gives you 25% of your daily intake. Vitamin C is also good for healthy gums and decreasing the risk of glaucoma.

A 2012 study by the American Heart Association concluded that anthocyanins (a potent antioxidant) is beneficial for cardiovascular health. Because of the high concentration of anthocyanins in blueberries, the study showed that incorporating them into your diet helps to prevent heart disease.

Blueberries are also reputed to increase brain function and memory. The U.S. Department of Agriculture continues to study the effects of blueberries on the brain in animals, and findings have shown that blueberries can slow down age-related memory loss. And new research is examining the use of blueberries in the treatment and prevention of Parkinson’s disease. Fresh blueberries and cream, anyone?

Although the cause of Parkinson’s remains unknown, about 500,000 Americans live with its debilitating symptoms. One of the main ones is the slow deterioration of motor skills. But investigators at Memorial University have discovered that alpha-synuclein, a protein found in the brain, plays a critical role in the release of dopamine, which helps to regulate motor control. Researchers found alpha-synuclein levels respond to blueberry extract; for the experiment, they injected fruit flies with alpha-synuclein to determine the impact of blueberry extract on their motor skills and longevity.

The research team used a control group of fruit flies and a test group. One received the blueberry extract and the other group did not. What they uncovered was astounding: The flies that received the blueberry extract lived for eight days longer than the control group. Eight days might not seem like a lot, but when translated into human terms, the researchers said the increase in lifespan was the equivalent of eight years.

Although the study on blueberries is still in the testing phase, the hope is that an ultra-concentrated version of blueberry extract will be brought to market in supplement form to treat and prevent the degenerative effects of Parkinson’s. Current treatment for Parkinson’s is largely medications that can curb the symptoms, but not prevent or eliminate them.

In the meantime, the idea of tossing a handful of blueberries into your smoothie (or right into your mouth) has never been so appealing. Call it a true superfood, given the help it could provide to people with Parkinson’s and their families. Sweet news!