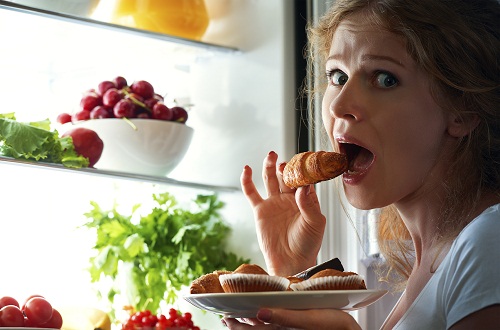 Two dots do not make a line, even when those dots are breast cancer and late-night snacks, as exemplified by a new study getting breathlessly extolled by The Washington Post. This study, led by Ruth Patterson of the University of California, which was inspired by past findings that nightly fasting better managed blood sugar in mice, attempts to draw the conclusion that in women who have previously had breast cancer, avoiding nighttime snacks can see a reduced risk of breast cancer relapse.

However, there are several issues that bring into question the reliability of the findings plus further alleged journalistic errors, all of which means that the study probably won’t mean much to most or all breast cancer survivors.

The hazard ratio was 1.36, which Patterson and other outlets reported as meaning that those with low fasting periods had a 36% relative increased chance of breast cancer relapse. This, however, is not exactly true and not as significant as Patterson and various news outlets would have you believe. The truth is that this 1.36 figure does not automatically translate into a 36% risk increase and, even if it could, there are several other flaws that prevent this study from being given weight.

The Hazards of Hazard Ratios

Hazard ratios are not the same as relative risk increases. To avoid getting too math-heavy, risk would be calculated at the end of a study by looking at how many people had relapses versus those who did not. The hazard ratio, which looks at differences over specific lengths of time, is better understood as a rate of change or progression towards a certain outcome—in this case, relapse.

Essentially, a hazard ratio is a representation of how likely someone at a given point in time is to reach the examined outcome within a certain period. Although this is similar to relative risk, hazard ratio on its own cannot be used to draw broader inferences from the data. Unfortunately, Patterson appears to have only calculated the hazard ratio. The result is that it is unclear how meaningful these findings are when assessing a person’s risk, if they have meaning at all.

Other Issues with the Study

The issue with hazard ratio may not be easy to understand but fortunately, that comprehension isn’t actually needed to realize some of the other problems with the study. All of the following are reasons that detract from the rigor of the findings and how confident a reader should be in the results.

Limitations of the Data

As mentioned above, the data was taken from the Women’s Healthy Eating and Living study, which aimed to look at the impact of nutrition on breast cancer relapse. In other words, the data came from a study that was looking at something unrelated to what Patterson was after. Although the data may be usable, it is inherently of lower quality since it’s being used to assess something that was not a consideration when it was collected and by definition cannot be as thorough or reliable as would be preferred.

One of the bigger issues is that Patterson does not have any actual explanation for why nighttime snacks could relate to breast cancer relapse. Proposed possibilities include impact on blood sugar, impact on inflammatory factors, impact on obesity, and sleep disruption. As mentioned under the study’s “Objectives” section, these candidates were proposed only because they are known risk factors for breast cancer, not because there is reason to think they are connected to nighttime fasting. Doing something like this tends to either result in a “spaghetti approach” of throwing ideas and seeing what sticks (a recipe for false positives) or making a hypothesis that suits the data (which is massive confirmation bias). The former can be seen in how erratic the significance values are for these four metrics when Patterson tries to find possible connections to fasting habits.

This is the first human study that looks at the impact nighttime fasting may have on breast cancer relapse risks. Patterson should be applauded for considering such a novel area of inquiry; however this also means that even if all of the above issues were not present, her findings would just be the first stepping stone. Until the findings, no matter how promising or rigorously achieved, are replicated, they cannot be considered more than one-off results. This is one of the central tenants of medical research and science in general.