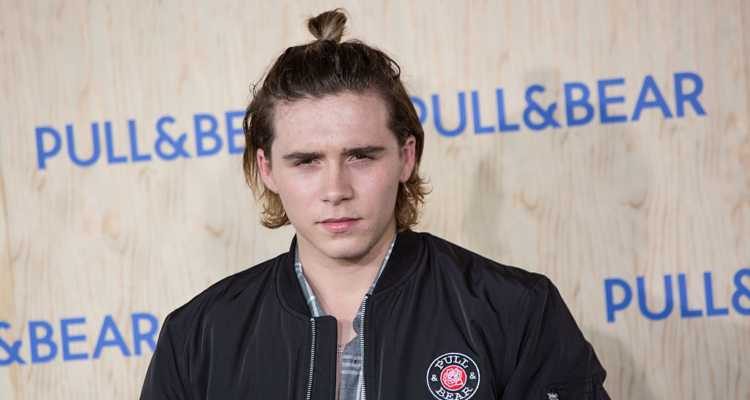 Brooklyn Beckham often posts images and videos of himself flexing muscles on Instagram. David Beckham’s son recently posted a video of him completing a pistol squat while holding a weight disc. But is Beckham flexing his muscles for someone special?

Rumor has it that Beckham has been getting cozy with Justin Bieber’s ex, Sofia Richie. The two were spotted on a late night stroll.

Beckham often takes to his social media account to not only show off his muscles and fabulous lifestyle, but other activities he enjoys such as soccer and skateboarding. The eldest child of Victoria and David Beckham has a toned physique thanks to the work he does with his trainer Chase Weber—who he often credits on Instagram as well.

To achieve his solid six-pack, Beckham completes specific core and abs workouts which has really paid off. His abs have graced Instagram on a few occasions, and we’re sure fans can’t help but drool over them.

In one particular video, Beckham showed off how strong his upper body and core really are by hanging from a pull-up bar and moving his legs to make it look as if he was easily walking on air. The best part is he was smiling throughout! Clearly, he’s quite strong and so the exercise didn’t really faze him.

With his father being one of the greatest soccer players of this time, it’s really of no surprise that the younger Beckham works out hard and spends most of his days in the gym. And considering how many black and white pictures and videos he posts, he clearly appears to be a fitness junkie.

In another post nine weeks back, Beckham is performing push-ups at super speed—on his fists to boot! To add fuel to the fire he appropriately captioned the video with “Easy push-ups. @chasenfitness.”

Fitness is pretty important to Beckham as he was often spotted with his ex-girlfriend, Chloe Grace Moretz, at the gym or partaking in boxing classes. Previously the two took a SoulCycle class which has continued to grow in popularity. Clearly, Beckham needs an active or sporty girl to keep up with his intense level of fitness.

Brooklyn Beckham is only 17 years-old, but he is quickly making a name for himself. Whether he is showing off his chiseled muscles or taking late night strolls with girls, it seems all eyes are on the eldest Beckham son to see what his next move will be.

Will he follow in his father’s footsteps and become another world-renowned soccer player? Only time will tell to see what sort of mark Beckham will make on the world.