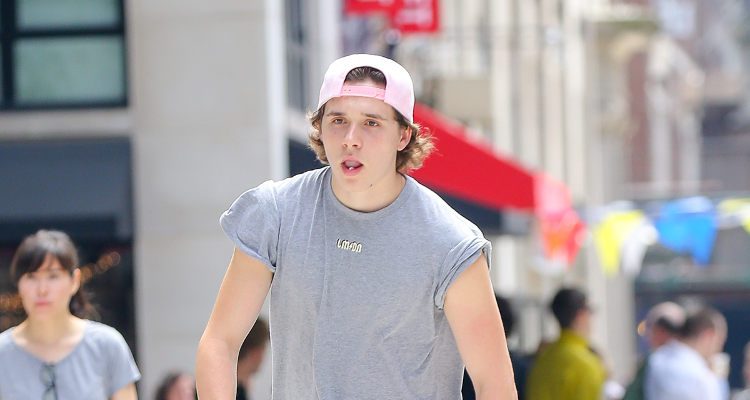 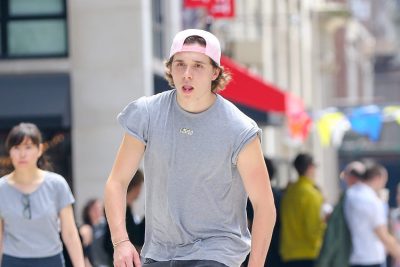 David Beckham’s son Brooklyn Beckham is very much into fitness, much like his former soccer player dad. But it might be safe to say that Brooklyn is well on his way to developing a far more muscular body than his dad.

Soccer players tend to never get overly ripped because it’s just not the right physique for the sport. Brooklyn is 17 and young, and clearly has an interest in working out his upper body, with definite attention on an abs workout, as well.

On Aug. 27, the photographer and son of Victoria Beckham posted a video on Instagram of himself doing push-ups at the gym with what looks like very little effort. He simply strides through them with ease and without any wavering.

It gave his fans, all 8.3 million of them, a glimpse of what his exercise routine looks like. Brooklyn wore shorts, a backwards baseball cap and training gloves for the exercise; celebrity trainer Chase Weber filmed the video.

The post is tagged with the caption “Easy push-ups” and he really did make it look easy.

In another Instagram post from that same workout routine, Brooklyn shows off his newly dyed blonde locks.

Fans were quick to give praise for his workout routine and his hair, as some comments said “really amazing” and “put that hair in a ponytail” because they thought it was distracting.

Many celebrities lately have been posting pics and videos of their workouts, especially of them doing pushups because they are getting involved in the #22pushups challenge.

Like the ALS challenge a few years back, people have to film themselves doing 22 push-ups, and then post the video to social media and nominate others to try out the challenge. The aim of the 22 push-up challenge is to raise to awareness for PTSD (Post Traumatic Stress Disorder).

Other celebrities who have stepped up to the challenge are John Krasinski, Chris Evans, and Guardians of the Galaxy star Chris Pratt and Scary Movie actress Anna Faris. The two are married, so they filmed their challenge together.

The teen’s dedication to fitness and a healthy diet comes as no surprise, considering his dad is heralded as one of the greatest soccer players of all time and works out still nearly every day.

David Beckham can often be found going to a SoulCycle class, and Brooklyn often joins him or goes on his own. SoulCycle is where Brooklyn met his now ex-girlfriend Chloe Grace Moretz.

The two split up this past August.

Brooklyn Beckham played soccer up until last year, but he was not offered a scholarship to continue on with the soccer academy. And that seemed fine with Brooklyn.

Playing in the shadow of your superstar soccer dad would be especially intimidating. People would always want you to be as good as, or even better, and that would be a tough act to follow.