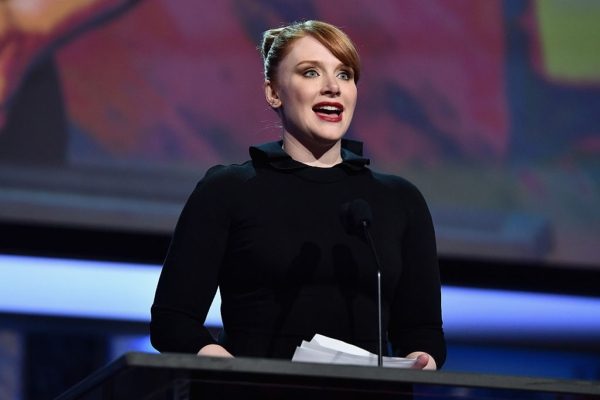 Ron Howard’s stunning daughter Bryce Dallas Howard recently showed off her significant weight gain transformation in Black Mirror season 3. Howard plays Lacie Pound, a woman who lives in a world that is dictated by the star rating of every interaction via smartphones, which echoes an uncanny similarity to the social media obsessed culture we live in today. Howard gained 30 pounds for the episode (entitled “Nosedive”) and hasn’t lost all of it yet. Her character has to conform to what others want her to be, and this sparked Howards own thoughts on body shaming.

Bryce Dallas Howard believes this too, and has some strong opinions on the matter. In an interview with Marie Claire magazine, Howard says, “In the culture we live in, there’s this pervasive, shared agreement that there’s a certain body type to admire, and it isn’t actually based on anything real or substantive. It’s a truly superficial thing, and there’s a cost to that. I feel like it’s a subversive thing which keeps women preoccupied with something that doesn’t matter, and takes up a lot of space, and prevents people from what they’re meant to be doing.”

The red-headed actress goes on to share that while she does have social media accounts (Instagram, Twitter and Facebook pages), she doesn’t manage them herself and sometimes her husband helps her filter through the comments. She recognizes that, for actors in Hollywood especially, there is an aspect of performance and entertaining involved in social media posts.

She also admits that sometimes it’s really hard to view comments on social media and that’s one of the reasons she stays away from it, adding “I’m concerned that I’ll see something that will upset me, and I don’t have a way to work it out with that person.”

She has a real down to earth attitude and is very modest, and was questioned by a close friend after noticing that Howard was mostly posting relaxed pajama pictures. The friend went on to encourage Howard to post “aspirational” pictures because of her platform as an actress, but Howard maintained that she doesn’t live the life that fans see on a day to day basis. That’s a really refreshing outlook from Howard—she really wants fans to know that what they see as part of the glamour of Hollywood is not what it’s like all the time. She really finds it hard to keep up that appearance, which makes her very relatable.

Her character in Black Mirror battles an eating disorder, and part of Howard’s reason for not losing the weight so quickly is to counter those messages about striving after an unattainable and unrealistic perfect figure. The episode is meant to provoke questions around how and in what ways we oppress our authentic selves. As an actress who has received public scrutiny for having put on weight, she knows firsthand about how hurtful it is to be criticized based on the way you look. This is an empowering message for youth and everyone who is social media obsessed.