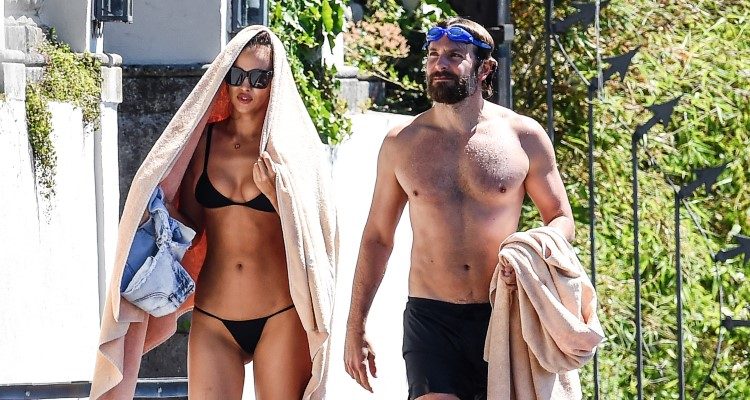 Bradley Cooper rose to fame when he debuted in the popular television series, Sex and the City. After his initial taste of success, there was no looking back for him. Since then, he starred in many movies and television shows and is one of the most popular actors in Hollywood.

The blue-eyed actor is currently dating Russian model, Irina Shayk, who is also known to be carrying their first child. Although the couple has never openly revealed any details about the “secret” pregnancy, Shayk has been spotted with a noticeable bump on several occasions, even at the 2016 Victoria’s Secret Fashion Show.

After the big New Year celebrations, Bradley Cooper was seen jogging in Santa Monica along with his personal trainer during the early morning hours. Cooper chose to wear a grey sweatshirt, blue tracks, and Nike sneakers while he jogged and had his baseball cap on backwards. Looking buffed up in his workout attire, the American Sniper star is probably aiming at weight loss for the upcoming year.

Bradley Cooper loves working out to give his body strength and to maintain his stunning physique. Even at 41 years-old, the Silver Linings Playbook star looks incredibly fit and lean, and he has his workout regime and personal trainer to thank for that!

Cooper opts for the 3-2-1 workout routine to achieve swift results. The 3-2-1 workout technique consists of three repetitions of 10 minutes each of cardio, two 10 minute workouts for strength training, and 10 minutes of core workouts without any reps. The workout is known to provide uniform training to the entire body and has to be performed at a stretch without any breaks.

If you want to try this, you can always opt to start with a lower frequency like 6, 5, 4 and so on, and increase once you get comfortable. Along with regular cardio exercises, Cooper also loves doing bench presses, squats, rope jumping, running, alternate high knee rope jumps, push-ups, military presses, medicine balls, and planks for his overall body exercise.

Sticking to a strict and composed diet plan, Bradley Cooper ensures he consumes no more than 2,100 calories per day, which is the ideal requirement for men. He also consumes five small meals everyday instead of three large ones, which helps in suppressing hunger throughout the day. His meals basically comprise of fibrous and protein-rich foods.

Bradley opts for lean proteins to help with his muscle-building exercises, which is a major part of his fitness regime. His other protein sources include chicken, meat, turkey, eggs, protein smoothies, and whey protein, which helps him gain stamina and energy for his physical activities.

His best tip is to keep your body hydrated throughout the day and avoid all forms of junk, unhealthy and processed foods, alcohol, tea, and coffee. He instead advises on having green tea as it is lighter and much healthier. He also recommends not following diets blindly but instead understanding what your body needs before settling for one.

Bradley Cooper also prefers natural proteins and vitamins instead of artificial ones that are manufactured by companies.