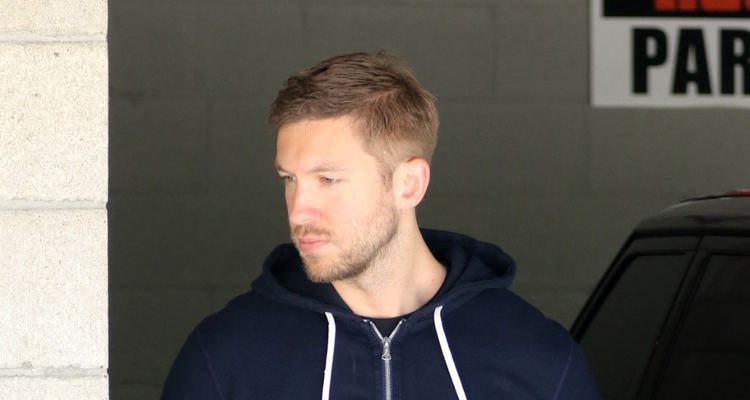 Taylor Swift's (now-ex) DJ boyfriend, Calvin Harris, shows off his ripped abs in his underwear, on a billboard for Emporio Armani, in the Meatpacking District in New York City on June 15, 2015. Credit: Christopher Peterson/Splash News.

Unlike his ex-girlfriend Taylor Swift, you won’t see Calvin Harris writing a break-up album. Instead Harris focuses his energy on working out . Harris, a world-renowned DJ, is regularly spotted leaving gyms as he works on his fitness routines.

According to Just Jared, Minnesota Vikings NFL player Antone Exum allegedly spotted Harris at the gym and thought he was a pro athlete! Are the workouts possibly being used as a distraction from the Taylor Swift drama?

Calvin Harris exercises—this much we know from paparazzi pics that are snapped of him frequently leaving the gym. And it’s hard not to notice the transformation Harris has undergone – have you seen his Emporio Armani underwear pic?!

Taylor Swift’s (now-ex) DJ boyfriend, Calvin Harris, shows off his ripped abs in his underwear, on a billboard for Emporio Armani, in the Meatpacking District in New York City on June 15, 2015. Credit: Christopher Peterson/Splash News.

Let’s take a closer look at how famous Harris bulked up and became eye candy to the rest of the world.

To become the body of Armani underwear you need to workout, hard! And that’s exactly what Harris did to land the gig. At age 31, Harris looks better than ever. Even with a busy travelling schedule one may question how he managed to get a six-pack along the way.

Harris sticks to a gym routine, even while on tour. His secret to looking good is pretty simply: Don’t drink, sleep well, eat well, and always ensure you have an ab roller along for the ride!

Although Harris is generally a private guy, one would speculate that his diet consists of plenty of protein, vegetables and limited sugar. Harris has even noted that living in L.A. has helped his diet as he can easily find food that is fresh and organic. When compared to the UK, he suggests that food options are much healthier in L.A., making it easier to eat healthy for the long-run.

Whatever Calvin Harris’ workouts consist of, he should definitely keep it up as he looks great! Harris went from a scrawny 20-something to a 31-year old fitness buff. His hard work is definitely paying off.