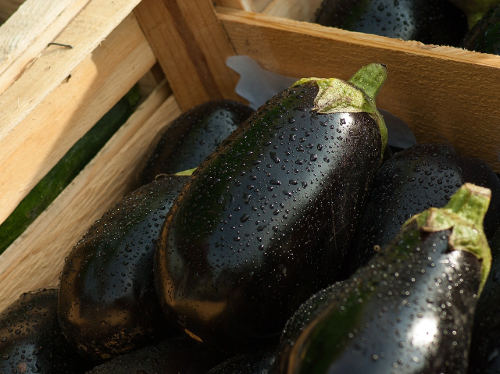 Eggplant is also known as aubergine, and it belongs to the Solanaceae family of the plant kingdom. Other veggies in this family include potato, tomato, and peppers, which are considered nightshade vegetables. Most of these veggies, except for tomatoes, are usually cooked before eating, and eggplant is not the exception. But, can you eat eggplant raw? Is raw eggplant poisonous?

There are some concerns raised regarding the safety of eating a raw eggplant. Let’s find out if raw eggplant is edible and some other facts about this versatile veggie.

Is It Safe to Eat Raw Eggplant?

Eating a raw eggplant may not always be safe depending on the variety. Eggplants and even some other veggies in this family, like potatoes, contain a glycoalkaloid called solanine. It occurs naturally in leaves, stems, and tubers of these plants.

Solanine is said to be toxic and can cause gastrointestinal and neurological disorders if consumed in large amounts. The symptoms are varied and range from nausea and vomiting to headaches, dizziness, paralysis, thyroid issues, and even death in extreme cases.

However, for these symptoms to occur, you need to eat huge amounts of raw eggplant. So, while you can eat a very small amount of raw eggplant, it is usually not recommended. Also, it tastes best when roasted, cooked, stir-fried, or baked.

Mature eggplants have negligible or no solanine present in them. The young eggplants have more of the glycoalkaloid in them. So, if it’s mature, can you eat eggplant raw? It is safer to eat when you remove the leaves and stem before consumption, as these parts contain the most solanine.

Eating raw eggplants with solanine may cause allergic reactions in some people. So, it is highly recommended not to eat raw eggplants.

Ensure you choose ripe eggplants and cook them before consuming. You can also peel off the skin to reduce the side effects or poisoning.

Also, when you chop eggplants, be sure to soak them in warm water for a few minutes to reduce the effect of toxins.

Side Effects of Eating Raw Eggplant

Some people can be allergic to eggplant and other veggies from the Solanaceae family. These allergic reactions include nausea, itchiness, and rashes. Such people should avoid eating eggplants altogether or consult their doctor to control the allergy.

Eggplants are gas-producing veggies and could lead to gastrointestinal issues in some people if eaten in excess.

To avoid eating eggplant raw, we have an easy recipe to make eggplant delicious and healthy to eat.

Chop the eggplant into circular or oval slices. Brush them with olive oil and bake for about 20 minutes at 400°F.

Flip the eggplant slices and add the tomato paste, roasted tomatoes, garlic, herbs, and cheese on the top of it, such that the eggplant acts like a pizza base. Bake for 10 minutes and serve.

So, can you eat eggplant raw? While eating a small portion of raw eggplant may not cause harm, it is certainly not recommended. Eggplant tastes delicious when roasted, baked, or cooked in some other manner.

Also, watch out for any allergies, especially in kids. However, you should eat eggplants moderately and avoid overeating them. Most eggplant recipes are easy to make, and you can try the easy recipe we’ve given above to get the maximum health benefits safely.

“What Are Eggplants Good For?” Mercola; http://foodfacts.mercola.com/eggplant.html, last accessed July 3, 2017.