Home > Advice > What's Bad For You > Can You Eat Raw Bacon? Is It Harmful to Your Health? 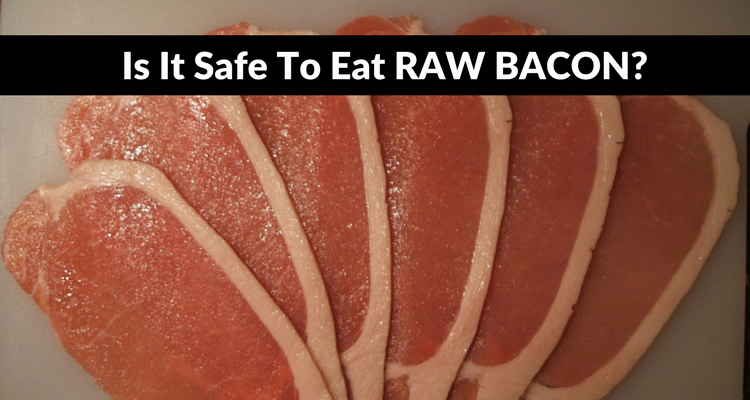 Bacon comes from salted and cured pork loin cuts that run along the back. It is juicy, has a tender texture, and is cured with a large amount of salt or brine. Bacon is cured like deli ham. You can eat deli ham, so can you eat raw bacon?

Can You Eat Raw Bacon?

Can you eat bacon raw? Is raw bacon safe to eat? No, you can’t eat raw bacon, and you shouldn’t even try. Eating raw or undercooked bacon can cause serious health problems.

Raw meat contains parasites and bacteria which may cause food poisoning. Eating raw bacon can cause many health problems like trichinellosis (or trichinosis). Trichinosis is an infection caused by Trichinella spiralis or roundworms.

Trichinella larvae live in the muscle tissue of animals, especially pigs. These parasites infect raw pork as well. Although commercial manufacturers cure and smoke bacon before selling it, that still doesn’t kill them.

Trichinella parasites need a host body to live and reproduce. Consuming raw or undercooked bacon which carries these parasites can cause trichinosis. If the parasites get ingested with the raw bacon, they mature into adult worms in the intestines over several weeks. The larvae then travel to muscles and various tissues in the body.

Can You Eat Smoked Bacon?

Smoking is cooking the bacon slowly over indirect heat. To kill the bacteria, it is necessary that the meat reaches a minimum internal temperature of 145°F.

Smoked bacon bought from the grocery store doesn’t guarantee bacteria-free bacon. It may just be sprayed with a liquid smoke extract to impart the smoky flavor. So smoking or curing doesn’t make raw bacon safe to consume.

Campylobacter, Yersinia enterocolitica, Staphylococcus aureus, Toxoplasmosis gondii, and Listeria monocytogenes are some of the types of bacteria that can contaminate raw bacon.

According to the United States Department of Agriculture, Food Safety and Inspection Service, adding salt just slows the growth of bacteria and makes it less perishable than raw meat. Bacteria needs water to grow. Salt slows the bacterial growth by reducing the moisture from the bacon.

Pre-cooking bacon kills the bacteria. However, it may still get contaminated with bacteria during the packaging process. Consuming contaminated pre-cooked bacon can also lead to health issues.

Even if you refrigerate bacon, some bacteria and parasites keep on multiplying. You should always cook bacon until it’s crispy. Then it can be stored in the refrigerator.

What Happens If You Eat Raw Bacon?

As mentioned, consuming ray bacon may cause trichinosis. The infection can be diagnosed several weeks after ingestion. If trichinosis is suspected, you need to do a blood test to detect antibodies to the roundworm.

According to the U.S. Centers for Disease Control and Prevention,  eating raw or undercooked pork can cause nausea, fever, vomiting, fatigue, diarrhea, and abdominal discomfort that can last for months. Consuming raw bacon may also lead to inflammation of the organs.

Bacteria and parasites in raw bacon can infect the gastrointestinal tract. It may cause diarrhea, vomiting, upset stomach, or bloating.

Related: Another Side Effect of Bacon

What to do if you eat raw bacon? In case you eat a raw bacon, you should consult your doctor immediately.

Now that you know that eating raw bacon is unhealthy, let’s discuss three healthy ways to cook it.

Line a microwave-safe plate with a paper towel. Place three to four bacon slices on it. Cook them for two to four minutes or until just cooked.

You can place the bacon strips in sandwiches and wraps. You can also crumble them and sprinkle over a salad.

Broiling bacon strips wrapped around some shrimp and veggies can make it healthy.

Put strips of bacon on a baking rack and bake them at 400°F for 15 to 20 minutes, or until cooked. The crispy strips can be served with French toast, pancakes, or eggs.

Pair your bacon with healthy ingredients like fresh green veggies, or whole cereals. Athough there are healthy ways to consume bacon, you should have one or two thin slices.

Bacon that is cured or smoked shouldn’t be eaten it when raw or undercooked. You should microwave it, roast it, or broil it to kill the bacteria and eliminate the possibility of contamination that may have happened during packaging.

Also, it is essential to check the package label ingredients used for smoking and flavoring, as well as for additives and sodium content.

Even with cooked bacon, there are other concerns being raised, such as the release of nitrosamines, which may be carcinogenic. However, more research is required in this area.

Also, since bacon is categorized as red meat, it should be eaten in moderation. It may lead to weight gain and increase the risk of heart disease and other lifestyle diseases.

Bacon is high in saturated fat and cholesterol and should not be a part of your daily diet. You can have limited portions once or twice a week; however, it is wise to opt for lean meat such as chicken and other healthy foods such as fish, fruits, whole grains, nuts, and veggies.

“What Will Happen If You Eat Undercooked Bacon?” Healthy Eating; SFGate; http://healthyeating.sfgate.com/happen-eat-undercooked-bacon-3110.html, last accessed May 24, 2017.