Home > Food Facts > Meat > Canadian Bacon vs. Ham: What Is the Difference Between the Two? 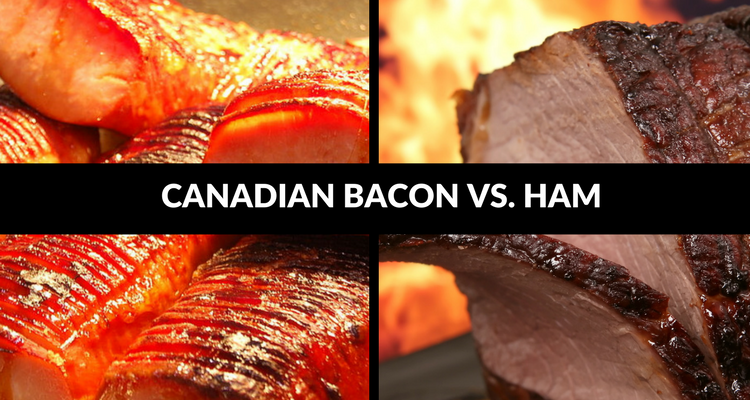 Canadian Bacon vs. Ham: What is the Major Difference?

Canadian bacon doesn’t come from the belly or any other part of the pork. It is made from salted and cured loin cuts that run along the back.

Ham comes from prime cuts of the leg, butt, and shank of pork. It is cured or cooked, and can be fresh or country ham, available in diced chunks, slices, or whole.

Fresh ham is classified depending on its curing process and water content. After curing, if the ham contains at least 20.5% protein and there is no addition of water, then it is known as country ham.

American bacon comes from the belly of the pig, and it is smoked, not cured. Canadian bacon can be smoked or cured. It is leaner than belly bacon.

Completely cooked Canadian bacon is more commonly available in the market in round slices and not strips. It is known as peameal Canadian bacon, and it contains higher amounts of fat than Canadian bacon. It is rolled in ground split peas or cornmeal to preserve it. 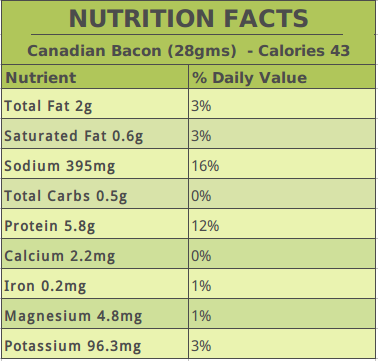 Canadian bacon doesn’t contain honey or sugar while ham does. Here are the nutritional differences between the two. 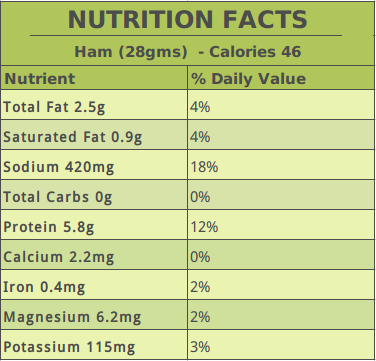 Both Canadian bacon and ham contain B vitamins and traces of vitamin E. Ham also contains more iron than bacon.

The minerals present in each are also more or less the same. Both contain potassium, phosphorus, selenium, and trace amounts of calcium, iron, and magnesium.

How to Use Canadian Bacon and Ham

Many people use both Canadian bacon and ham in various recipes. You can use ham as an ingredient in hot dishes like split pea soup, or in cold dishes like a ham and rye sandwich.

The most common usage of ham is in salads and sandwiches. Since Canadian bacon is cooked, you can eat it cold unless the package says it’s uncooked. Most people prefer it for lunch or dinner.

Canadian bacon, for the most part, is eaten at breakfast. You can add it to breakfast sandwiches, fold it into an omelet, serve it on the side with pancakes, or add to hash. You can also add Canadian bacon and ham as pizza toppings.

Many manufacturers add nitrite to preserved meats such as bacon while processing. These react with the proteins or amines in the meat to form nitrosamines.

Nitrosamines are proven to be carcinogenic when tested on animals. However, these are present in very low amounts and requires more research in this area.

When buying these meats, be sure to check the ingredients for additives, flavorings, emulsifiers, artificial sweeteners, and packaging date thoroughly to avoid bacterial contamination and other health issues.

Both Canadian bacon and ham do have a good amount of nutrients such as various vitamins and minerals. However, both are processed meats, and more so ham. They are also high in sodium and other additives, so you need to watch the portions you eat.

Opt for extra lean ham if you have to eat it. Canadian bacon is slightly leaner than ham because of the parts of the pork used are leaner. Having said that, watching your portions is still essential.