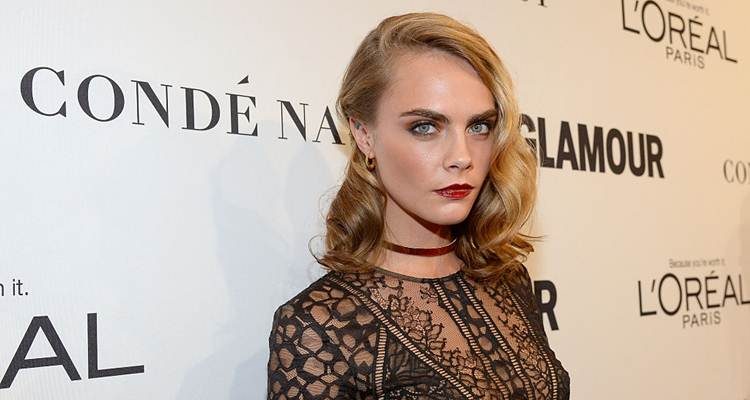 Want to know what the diet and workout secrets are of some of the best bodies in Hollywood? Cara Delevingne, Vanessa Hudgens, Adriana Lima, and Hailey Baldwin all have beautiful bodies that they say is the result of working out and eating right.

These stars love to stay active by doing a variety of exercises including yoga and cardio activities (treadmill, running, boxing, sprinting, Pilates, and swimming).

Eating right can mean different things to different people, but at the core of it is fresh food that isn’t processed. You’ll notice that most of these celebs avoid junk and processed foods, except for those long-awaited cheat days.

Could 24-year-old supermodel, Cara Delevingne from Suicide Squad, be following a grueling model workout since her split from singer, St. Vincent?

Well, according to sources, the actress is staying super busy to keep her mind off the breakup. She looked incredible earlier last week as photos captured her on the set of her latest Rimmel makeup advertisement in London, showing off her incredible abs in a crop top.

Delevingne is in amazing shape, but did you know that she admits to disliking the gym? Yes, although she is not a fan of working out (join the club, Cara), she does exercise four times per week and it’s usually for a 30-minute cardio session. She works alongside a personal trainer who admits that these 30-minute cardio sessions help her burn an additional 500 calories per workout.

Cara  Delevingne also counts calories which may not be a suitable method for everyone, but it works for her. She tries to stay within 1,400 calories per day and does not exceed this number. She also consumes a natural and powerful metabolism booster twice per day, which also helps her burn fat and calories—sometimes up to 700 calories per week.

Vanessa Hudgens of High School Musical showed off her toned abs when she headed out for lunch in Hollywood. The star credits a portion-controlled diet for her flat tummy, which she often reveals by wearing cropped tops.

The girlfriend of Austin Butler gave her abs even greater attention by sporting a double-blinged belly button ring that made it impossible not to notice how fit the actress really is.

She previously opened up to Shape magazine about her love of junk food, but she didn’t want to be unhealthy anymore. She admitted that she would finish a tub of ice cream before going to bed and that her fingers looked orange due to her love for Cheetos.

After filming High School Musical, Hudgens was no longer burning off those extra calories in dance sequences, and when she went back to film the sequel, she admitted that her costumes didn’t fit her. She revealed, “I lived on Hot Pockets and never touched vegetables; I needed to do something about my diet.”

Now Vanessa Hudgens’ diet is much different, as the actress enjoys omelets for breakfast and salads and grilled chicken or fish for lunch.

The Victoria Secrets Angels are joining in the Mannequin Challenge while showing off their envy-inducing toned bodies, abs, and sportswear in a frozen pose. Adriana Lima’s toned abs are a result of 10 years of training with fitness expert Michael Olajide, Jr. and a healthy diet.

Lima said to the Daily Star “I eat a lot of protein and green vegetables and I always take supplements like Omega-3 and a multivitamin which contains a bunch of things from vitamin B12, to antioxidants and zinc.” Her detailed diet is as follows:

Breakfast – Lima eats oatmeal with raisins and egg whites for breakfast. She has milk or coffee with it, and for a change, she has muesli with yogurt or honey.

Lunch – She has a lunch which is full of fiber and proteins. She eats fish, chicken or red meat with grilled vegetables. The fiber helps to prevent the fats from accumulating in the body.

Snacks – Rather than opting for salted and processed foods, she consumes refreshing foods that are loaded with vitamins like cucumbers and carrots. If she is feeling low, she eats chocolates or honey to uplift her mood.

Hailey Baldwin is a model and the daughter of actor, Stephen Baldwin. The 19-year-old Baldwin was showing off her toned abs with 5 Seconds of Summer drummer, Ashton Irwin, while hanging out in Los Angeles Saturday, November 6.

This has lead to speculation that there may be a new romance between the two. Baldwin and 22-year-old Irwin were found enjoying a sunny day on the streets of Melrose Place.

Baldwin has quite the strict diet routine. She is seriously committed to clean eating, although she does have cheat days now and then. She consumes a healthy diet for the health of her skin and body. What does her daily diet contain?

First off, it is very important for her to stay hydrated. She will drink a couple of bottles of water throughout her day. For breakfast, she will eat oatmeal, eggs, or a protein smoothie.

Lunch for Baldwin will include grilled vegetables, salad, fish, or maybe a gluten-free sandwich. She will often avoid gluten and eats Caesar salad without croutons. Baldwin will also have cheat days every so often. The flexibility allows her to consume favorites like french fries, cheeseburgers, and pancakes.

Cheat days are something we can look forward to after a long week of eating right. Do you crave cheeseburgers like Hailey or chocolate like Adriana?

Every day can’t be a “cheat day” if losing weight, being fit, and getting healthy are priorities. The two don’t go hand in hand. So take a page from these beautiful women, and incorporate treats into an overall well-balanced diet that includes regular workouts.