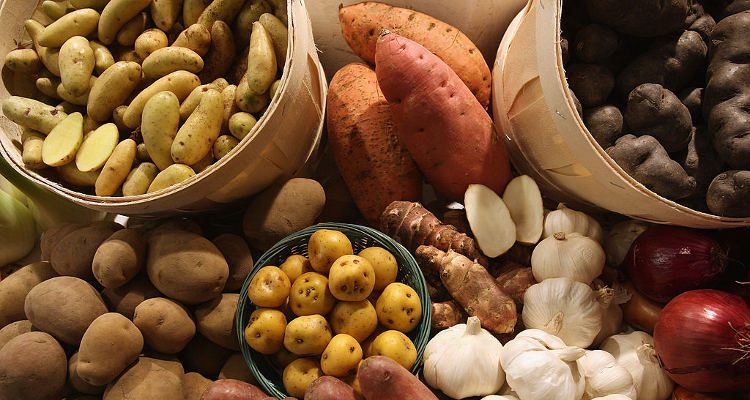 Sweet potatoes have been growing in popularity over the past five years, and now, virtually every restaurant menu offers them as an alternative to regular French fries. But finding a baked sweet potato alongside a white baked potato hasn’t happened quite yet. Maybe someday soon.

Many are concerned about the carbs in white potatoes versus the carbs in sweet potatoes, but carbs shouldn’t be the only consideration. Sugar content and how the potato impacts the body’s glycemic levels, or how it raises or stabilizes blood sugar levels, are also important.

First, when talking sweet potatoes, it’s important to distinguish between the vegetable and its cousin, the yam, which is from a different plant family altogether. So they are not the same. Yams have a lower nutritional profile, so be sure to pick the right food.

How Many Carbs Are in a Sweet Potato?

Many people are worried about carbs today because carbs can contribute to weight gain. But sometimes people get carried away, becoming concerned without having facts to back it up.

Yes, carbs should be a cause for concern when they promote easy weight gain, but the types of carbs that are most detrimental are simple carbohydrates. Carbs also exist in many fruits, vegetables, and grains, known as complex carbohydrates.

If you eat a well-balanced diet loaded with a variety of them, and avoid white rice and anything made with refined white flour, then you will be ensuring that your body gets few simple carbs.

For weight loss, cutting out white potatoes for a while is ideal because they have slightly more calories, less fiber, and more carbs than in sweet potatoes, though not a significant amount.

But when it comes to losing weight, sometimes every bit counts, and the sweet potato has fewer carbs at roughly 24 grams to 29 grams in an average-sized white potato.

Are sweet potatoes a starch? Yes, most certainly they are. But they are a good starch, and one of the best to have if a starch is desired.

Carb Count in A White Potato

As mentioned, the carbs in a white potato outnumber those found in a sweet potato. Not by so much that it deserves the vilification it has received in the media and popular mindset, though.

Again, if weight loss is a goal, then certainly sticking to the lower carb option that is the sweet potato makes perfect sense.

Overall, if a proper diet is adhered to that includes grains, fruits, vegetables, and lean proteins and avoids processed and refined foods—and a regular exercise program is implemented—then the roughly 5-gram carb difference will make a difference and is worth noting.

Sweet potatoes have many health benefits, including being high in vitamins, minerals, and fiber. But are sweet potatoes high in potassium? They are, but they fall short compared to the amount found in white potatoes.

If a potassium boost is what you are after, look to the white potato; it has 750 mg of potassium compared to the 542 found in a sweet potato.

Below is a table to show what the difference in nutrition is between a white potato and sweet potato. Overall, it answers the question are sweet potatoes good for you? Yes, they are very good for you and are a perfect complement to any meal, including breakfast.

Overall, based on nutritional facts, the sweet potato comes out on top as the winner in potato versus potato, even though it does have a higher sugar content and lower potassium values. It is the clear choice for dieters because it has fewer calories and carbs.

But having a white potato once in a while is also a healthy choice and should not be considered part of any cheat day if baked and then topped with a healthy fat such as butter or olive oil.