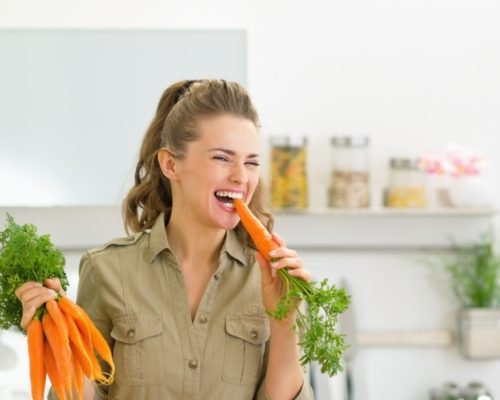 John Tesh once again tweeted out some nutritional words of wisdom—this time on the best way to munch on carrots.

In a tweet sent out to his over 263,000 followers Monday, Tesh suggested that you cook and eat carrots whole rather than cutting or slicing them.

According to Tesh, carrots lose 25% more nutrients when they’re cut:

So does science support John Tesh? Yes, actually. A 2009 study conducted by researchers at Newcastle University and the University of Southern Denmark looked at the effects of cooking carrots whole vs. slicing them and then cooking them. It turns out that carrots cooked whole have more nutritional value.

According to the study, carrots that are boiled whole contain 25% more of an anti-cancer compound known as falcarinol compared to carrots that are sliced first. Study researchers state that slicing carrots increases the surface area, so nutrients seep out into the water as they’re being boiled.

For the study, researchers’ state that rats that were fed a diet that included carrots (or falcarinol alone) were a third less likely to develop full-scale tumors than rats in a control group. Experiments were first conducted on raw carrots, but the latest findings revealed that the composition of carrots changed once heated. Basically heat (i.e. boiling carrots) destroys the cells—resulting in an increase of the concentration of falcarinol as the carrots lose water.

Heat also relaxes the carrots’ cell walls. Water-soluble compounds (i.e. vitamin C and sugar are lost through the tissue surface and result in falcarinol and other compounds seeping out. If the carrot is sliced before being cooked, the surface area will become greater and result in a loss of nutrients compared to a carrot that is whole when it is boiled.

Furthermore, according to researchers, naturally occurring sugars are higher in concentration in carrots cooked whole compared to carrots cooked cut. So cooking carrots whole and then chopping them after (if you so desire) are more nutritious and taste better!