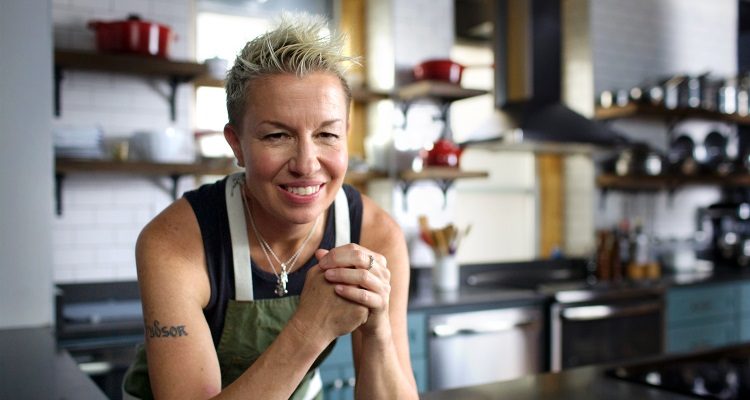 Elizabeth Falkner has been a lot of things over her 26 years in the restaurant industry. A short, but hardly exhaustive list of her accolades includes: opening the wildly popular Citizen Cake in San Francisco, being the first American to win the “Freestyle Neapolitan Pizza” category of the World Pizza Championship in 2012, competing on several competition shows (Iron Chef America, Food Network Challenge, Top Chef Masters, etc.), and even judging a few herself. Between the sweet and savory highlights of her career, Falkner had one very persistent constant: atopic dermatitis. Although she knew almost nothing about this painful, disruptive, and sometimes disfiguring skin disease when first diagnosed 20 years ago, Falkner has found its influence undeniable throughout her life.

As part of an effort to bring sufferers of atopic dermatitis (AD) together, Falkner has signed up with the Understand AD campaign, which aims to help educate laypeople and sufferers alike about the different aspects of the disease. FoodsForBetterHealth recently had the opportunity to chat with Falkner for a phone interview so that she could share her own experiences with our readers.

Let’s start with a basic definition. What is atopic dermatitis?

“Atopic dermatitis is a severe skin disease. It’s actually a disease—I wouldn’t even refer to it a skin condition because it has effects from the inside out.”

“Yes. I can’t really speak to it like a doctor, but I can tell you my experience of having it for 20 years or more.”

“Well, no I can’t really speak to it like a medical professional. I just started getting it 20 years ago—major, severe, itchy lesion. You can’t even call it a rash; it was just this lesion kind of thing on your skin. I had it on my legs really badly and I didn’t know what it was. Then I had it on my hands. This was while I was running around during a high point in my restaurant/chef career. I went to a doctor and she prescribed some ointments and told me I had moderate-to-severe atopic dermatitis. There are over 1.6 million adults in America suffering with this disease.

It affects about 3% of adults.

“Yea, a lot of people; and I didn’t know that at the time. I didn’t know any statistics about it and was just told to take some steroid ointment. It never took it away—nothing cures it—and I would get flare-ups a lot. Stress really adds to it. It’s a kind of reaction on your skin where you have to scratch it because it’s just too unbelievably painful. But when you scratch it that just makes it worse because it starts scaling and it reacts over and over again.”

Atopic dermatitis and regular eczema tend to get grouped together. How would you differentiate the two?

“Well it’s a severe, chronic eczema… they [Understand AD] just recently did a survey with 500 people with some pretty shocking percentages on how it affects people physically, socially, psychologically.”

That was the internet survey—the one with 505 responses?

What’s the back story for Understand AD? How old is the campaign?

What’s the overall goal for Understand AD? Is there a specific perception you’re trying to change about the condition?

“Yea. As I said, 20 years ago there wasn’t anyone who could talk to me—my doctor couldn’t even talk to me—about how many people were suffering from it. It’s the sort of disease that doesn’t really have headlines, but it’s something that 1.6 million adults in the United States—just adults but kids get it too—suffer from. It affects a person physically and certainly socially. I’ve been, you know, running around my restaurant for many years when I’ve had severe red, scaly skin on my hands, and that’s not an ideal situation for a chef putting food down in front of you or talking to employees or guests.

I’m not the only person who’s suffered from it and there’s a lot of people around. A lot of people who have also shared their stories on the website. I’m the sort of person who’s bulldozed through my career and said, ‘Whatever ails me, it doesn’t matter—I’m Wonder Woman,’ you know? I think that I have a strong voice for people who suffer from this disease—who carry on and try to do things to balance out their lifestyle and still be able to perform and go out, and go out on a date or a job interview and know that it’s not some contagious disease. It’s something that the people who have it certainly suffer with but can certainly try to work through it.

There’s a lot more science and understanding behind the disease now. That’s why we need to bring awareness to it—so people who are suffering from it can actually know that they’re not alone and that there’s a lot more information about it. It doesn’t affect people the same way and there are totally different trigger points for different people, but working with a doctor or dermatologist is actually a really good partial solution. Taking care of your body—I exercise a lot, I’m training for the New York Marathon right now. I’ve always been a physically athletic person, and I believe that as a chef—to take care of myself—because it’s a crazy hard job.

There’s also, you know, watching what I’m eating. I’m not on some crazy fanatical diet but just paying attention to it and trying to find some inner peace with having this disease that’s quite frustrating.”

A bit of a Zen approach, if you would.

You mentioned exercise. My understanding is that sweat can actually be an irritant in some cases. Have you found that to be the case?

“You know, I think it depends. I’ve certainly felt like it when I’ve been standing behind a hot line in a kitchen. Kitchens are a hot, hostile skin environment anyway; so yea, a constant day of sweating in the kitchen in a confined environment with the air circulating off the stove is not an ideal situation. I do find that something like hot yoga doesn’t seem to trigger anything and actually feels like it’s helping.”

Has your atopic dermatitis shaped any decisions you’ve made as a chef? Do you find you use certain ingredients more or less than others to avoid breakouts?

“I can’t tell you what specifically which ingredients to me are irritants, quite honestly, because I try to eat/try/taste everything and I can’t really go ‘oh it was chili peppers’ or something. I can’t specify what exactly triggers it and I think it’s more like a group of things. I think it’s more stress-related. So I think if I balance out food stuff, that makes me feel like a whole better person. Which means eating more consciously and smartly and avoiding a lot of fried food. And I don’t really eat a lot of heavy ingredients, plus I work out. There’s not something specific I’d say ‘stay away from’ since I think it’s different for every person.”

Moving back to the survey, it had 505 responses from people with moderate-to-severe atopic dermatitis, and 82% reported making lifestyle changes due to their AD. Was this more or less than you expected?

“It didn’t really surprise me. Ah, but I forgot to tell you—I haven’t worked in a restaurant for two years. I think it’s really helped my stress level, not having to manage employees or deal with vendors and transactions going on every day.”

But you’ve been on competition shows, haven’t you?

“A lot of people ask me if I’m going to open another restaurant. While I sometimes have the desire, I’d say that honestly, because I don’t have so many bad flare-ups anymore—and even two years ago in my last restaurant I was having severe breakouts—the idea of going back into that environment is not attractive for this among other reasons. There’s the physical side of it and how painful it is but also psychologically. Its frustrating—the best description for this disease is that it’s totally frustrating because there’s nothing you can do to fix it.”

That’s true. There’s no cure and the same treatments don’t always work the same for each person. Is there a specific routine you use when trying to treat your own symptoms?

“Well, I’ve been using some prescribed ointments. When I feel something coming onto my hands I’ll use some. But I also use this kind of neem oil I found in a natural food store—it’s made somewhere in New York actually—and it’s got neem oil and basal and sandalwood and it smells very nice and is very soothing. There’s no tea tree oil in it.

Sometimes, though, I will use some tea tree oil mixture—I have a lot of essential oils myself because sometimes it feels like just the smell can be calming. I also have this ‘superfruit’ that I discovered recently called sea buck thorn. It’s got a lot of antioxidants and good skin vitamins, not unlike goji berries in a lot of ways. Dried, it’s kind of tart but if you get it frozen, which I sometimes do in Canada, it’s pretty tasty. But it’s mostly used in pharmaceuticals and I have a lotion that has some. Occasionally, I use coconut, but sometimes that makes my skin drier instead.

I don’t think treating it from the outside with lotions and potions is really the answer since it’s really coming from the inside out. I think that’s what they [scientists] discovered more recently too and I’ve learned from this campaign. So a lot of it is thinking more about how we’re taking care of our bodies from the inside out. Not just about you’re eating and not just what you’re putting on your skin.

With this survey done, do you know if Understand AD has any other projects in the works?

“Not that I’m aware of. I think that there’s just a lot of good storytelling from other people suffering from the disease on the website. The campaign is really more about awareness and people just coming out and saying they have this disease and how it’s affected them and so we can all learn more about it.”

Other than Understand AD, are there any other projects you are currently working on?

“Oh sure, I mean I’m constantly going on food and wine festival and fundraiser circuits. I teach cooking classes here and there. I also have a memoir I’m working on and editing right now; hopefully that will come out next year. I am very busy working with my brother on some food art installations that are somewhat challenging to explain to people but are basically about bringing food into gallery settings. Not dinner theater but presenting food issues and taboos in a more artistic setting and completely outside the restaurant context.”

I… think I understand?

I assume it makes more sense seeing it in person rather than hearing about it over the phone.

“Yup. But, you know, I’ve been working the restaurant business for 26 years and I love the restaurant industry—I’ve done really well in it and I have an extended family of chefs and restaurant friends all over the world. I think that what we do as chefs is very powerful and could be even more powerful with how we affect people’s diets and food policies and all kinds of things, and I’m very much thinking like that because of all my experience in the restaurant industry.”

Elizabeth Falkner’s personal story, as well as more information about atopic dermatitis and the stories of other people’s experience with the disease, can be found on the Understand AD website. (https://understandad.com/)