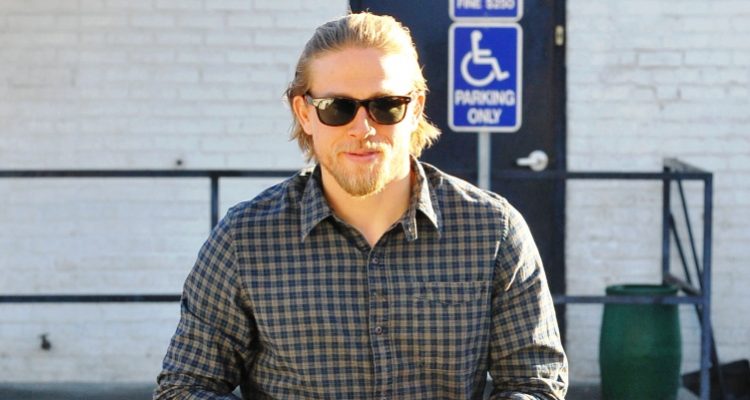 Sons of Anarchy star Charlie Hunnam is sexy – there’s no doubt about that! His character on the show is the leader of the Sons of Anarchy Motorcycle Club, so Hunnam’s got to be in amazing shape. And he is continuing with that fantastic shape in 2017’s release King Arthur.

Best Known For: Playing Jackson “Jax” Teller in the FX drama series Sons of Anarchy from 2008 to 2014. He is also known for playing Nathan Maloney in the UK drama Queer as Folk from 1999 to 2000.

Charlie Hunnam’s workout is all about getting cut. He does not rely on a trainer, and his workouts are simple but effective. They take consistent effort and really make him work up a sweat.

His daily workout routine lasts for one hour and consists of 150 push-ups, 150 squats, 75 dips and 75 pull-ups, three to four times per week.

Hunnam’s routine also includes an abs workout. He cycles through a series of different abs exercises, with the entire workout lasting about 20 minutes. It includes a combination of side crunches, regular crunches and leg lifts – although Hunnam says he does about 20 different ones in total.

With a workout like this, it’s no wonder the 36-year-old British actor isn’t very shy when it comes to taking his shirt off – and it’s safe to say his fans don’t mind. However, he does admit that Brad Pitt set the bar high for all men when it came to his physique in Fight Club. Hunnam basically strives for that look in all of his roles.

Here are some of Charlie Hunnam’s workout tips:

When it comes to his diet and eating plan, Hunnam likes to ensure he’s eating plenty of quality food. What does that mean? He doesn’t like to eat fake, over-processed foods or much junk. Instead, he might opt for whole, natural foods.

Because his exact diet is unknown, it’s assumed that to build his strong muscles, Hunnam likely takes in some lean protein like grilled chicken, beef or fish.

It’s also likely that he avoids foods that are high in fat, since they would have a negative effect on the lean body he tries to achieve through his workouts.

If there’s one thing to take away from the Charlie Hunnam diet and workout plan, it’s to find a workout that you like (no trainer needed); that fits into your time schedule; and that targets all your muscles, especially your core.

Also be sure to eat as cleanly as you can to avoid adding any extra toxins or unnecessary fat into your body.