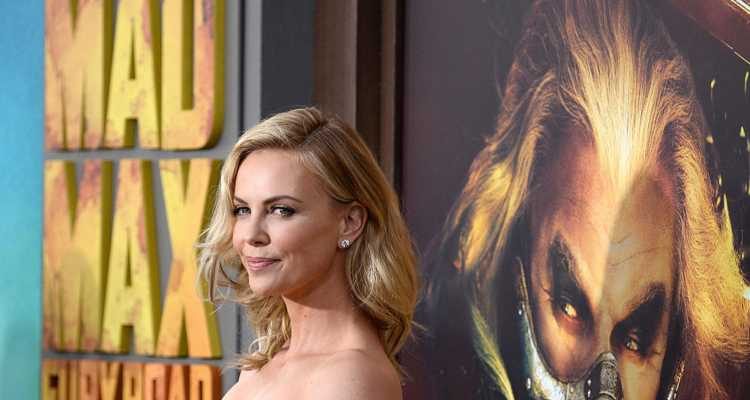 Actress Charlize Theron is continuing to film for her upcoming comedy called Tully, a new Jason Reitman film. The actress was seen riding around New York City on a bicycle earlier this week for some scenes for the movie, not for any training purposes since she has to stay slightly overweight for the role.

Obviously, the weight gain hasn’t stopped Theron in any way. The movie is about a mother of three who is gifted a night nanny by her brother, and the unique bond she develops with Tully, the nanny.

In the bike scene, Theron slipped on a leather jacket over her lumberjack shirt, and was followed by co-star Emily Haines, also on a bike. The movie script was written by Diablo Cody, and Tully is played by The Martian’s Mackenzie Davis.

Theron says that she is fat right now thanks to the 35 lbs. weight gain for the role. The mom of two had to put on weight for the role because she portrays a mom of three who has recently given birth.

The 41-year-old actress is usually in top physical form, unless required otherwise for a role, and is a fitness fanatic. She is always active and works hard to maintain her athletic and fit body.

At the amfAR Inspiration Gala in Los Angeles a few weeks ago, the star wore a loose fitting black gown with a black blazer, a noticeable departure from her typical body hugging gowns that show off her shapely and toned curves. “Yes, I am very fat right now,” was the response she gave when comedian Chelsea Handler made a joke about the actress’s weight.

This isn’t the first time the actress has put on weight specifically for a role. Her most notable role, and one that earned her an Academy Award for Best Actress, was for her portrayal of Aileen Wuornos in Monster.

She won 16 other awards that year for that role. But Theron also had to go the other route and had to buff up for her role in Mad Max: Fury Road.

Eating clean is how the actress likes to eat. She chooses fresh fruit, vegetables, and lean proteins over junk food and processed foods. Steak and eggs for breakfast is one of her favorite meals in the morning, and it is a protein-packed combination that keeps her full for hours. Theron simply loves red meat and the high fat breakfasts she eats regularly are balanced out by the salads and fish she often has for lunch.

Theron is a trained ballet dancer and has always been active, and her usually toned physique shows this. Fedele De Santis, owner of The Gym on Nemo, has worked with the South African beauty for years. He says she is serious about her workouts. On her own, Theron likes to do yoga and Pilates regularly.

In May, Theron told British GQ that beauty can work against an actress. “Jobs with real gravitas go to people that are physically right for them and that’s the end of the story,” she said. “When meaty roles come through, I’ve been in the room and pretty people get turned away first.” That’s why it helps when an actor to be willing to method act and gain or lose weight and manipulate appearances as needed for the role.