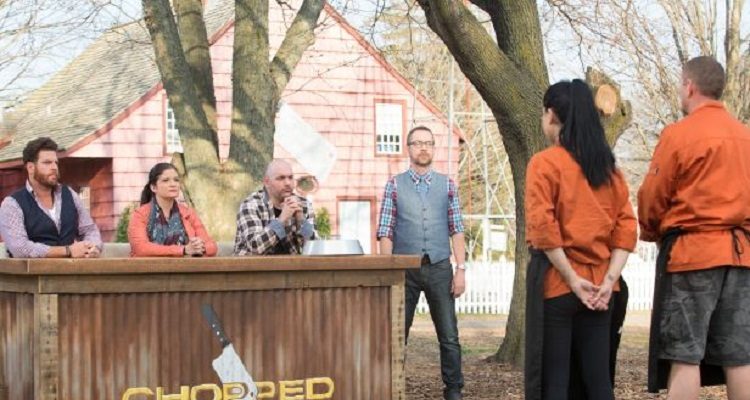 Judge Sanchez is a host of the Cooking Channel’s Emmy-nominated Taco Trip, the author of two books on Mexican and Latin-American cooking, chef and owner of Johnny Sanchez restaurants in New Orleans and Baltimore, and has even been a guest chef at the White House.

Judge Guarnaschelli is familiar with competitive cooking in a very personal way: she was the winner of The Next Iron Chef: Redemption. In her post-victory, she serves as the chef at New York City’s Butter and The Dark restaurants.

Judge Freitag is a CIA graduate (the cooking school, not the intelligence agency), and has battled it out on Iron Chef America and The Next Iron Chef: Redemption. Now she works as a chef at New York’s Empire Diner.

Judge Santos has been in the restaurant business since he was a teen and is now the owner of two New York City dining locales, Beauty and Essex and The Stanton Social.

Judge Zakarian is another cooking battle veteran as the winner of The Next Iron Chef: Super Chefs. He is also the chef and owner of the Lambs Club and the National, another pair of New York City restaurants.

Judge Chauhan is a graduate of both India’s WelcomGroup and the Culinary Institute of America. She has worked extensively at Vermillion restaurant locations in both New York City and Chicago and was a prior contestant on Iron Chef America.

Judge Murphy has worked under famed chefs at top restaurants across Paris and New York City before taking the helm at his own Landmarc restaurant. He is also vice president of the Greater New York City chapter of the New York State Restaurant Association.

Judge Samuelsson is the owner of NYC’s Red Rooster Harlem restaurant and has fought it out on The Next Iron Chef: Super Chefs and Iron Chef America. He has even been to the White House, serving as a guest chef for President Obama.

Judge Conant is another CIA grad and the owner of five Scarpetta restaurants and D.O.C.G in Las Vegas. In addition to being an Iron Chef America fighter, he’s also hosted the 24 Hour Restaurant Battle.

The Emmy Award-winning Ted Allen is the current host of Chopped but has an extensive history as a contributor and judge to numerous food and lifestyle shows including Top Chef, Iron Chef America, and Queer Eye.

Who Will Win the Chopped Grill Masters Season 3 Napa Finale?

The four contestants who fought through the previous challenges have all made their mark and showed off their mastery of the grill, meaning tonight’s finale could truly be anyone’s game. Here’s a quick summary of the Chopped Grill Masters grillers and what brought them to being part of the final four.

Jonathon brought a great deal of energy and mad scientist’s flair as her cartwheeled (partially literally!) to the winning spot in the first challenge. For the appetizer, he went for the seafood with octopus in a sweet and savory marinade accompanied with grilled cauliflower over mesquite wood—except he didn’t grill the veggies all the way through. After an entree of Oaxacan Block Party, he pulled together pineapple and Anaheim chilies into a dessert for the win.

Sophia’s win in the second challenge came thanks to her staying true to her skills and preferences and helped her overcome a few missteps in the appetizer and entree rounds. The appetizer basket made use of flatbread dough, which everyone but Sophia chose to grill—which judge Freitag said took away from the taste. During the entree round she made a recovery with some sea urchin but made a small error in letting the skin of her halibut go soft. Even the dessert round seemed in question when Sophia’s attempt at smoking the marshmallows made them shrivel away! Despite these setbacks, Sophia’s smoked strawberries won the judges over and got her the win.

Daniel’s approach is thorough and methodical, which let him come out on top in the third challenge. He took the appetizer round easily thanks to expertly tenderizing the abalone shellfish. The entree round was similarly conquered by going against the grain. While everyone else grilled their rib-eyes to serve steakhouse style, Daniel served his dish sliced and portioned to wow the judges with the fine dining experience. The dessert contest was trickier but Daniel’s flavor balance let him triumph with his approach to the basket’s trifle, poached pears, slab bacon, and pistachios.

Tony became the last finalist after wining in the fourth challenge. Though this James Bard Award-winner had the confidence, it didn’t make his victory a certainty. In both the appetizer and entree rounds, Tony did a unique take on the challenge with a uniquely crafted steak rub and novel use of red snapper bones and drippings to extract additional flavors. Unfortunately, missteps elsewhere—he overpowered a basket ingredient in the appetizer round and left his grapes uncooked in the entree—racked up the tension going into the dessert stage. His French take on the olive oil cake mixed in savory notes for an ultimate win, catapulting him to the final challenge.