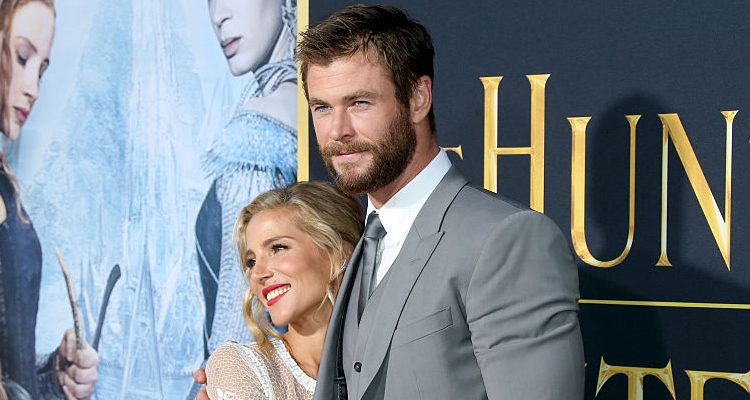 Chris Hemsworth, known for his hunky looks in his titular role in Thor, played doting dad on a recent family outing. Hemsworth enjoyed some good family time with his wife, Elsa Pataky, and children at Byron Bay. The 33-year-old Australian actor showed off his softer side as he held his four-year-old daughter, India Rose, and one of his twin boys in his muscular arms.

The actor who has completed filming the third installment of the Thor franchise, enjoyed hanging out at Byron Bay with his wife and children. This Instagram pic should definitely put the rumors about the couple being on a break to rest.

Looking for a new wife according to @womansdayaus and other misleading outlets! Honey you still love me right?! @elsapatakyconfidential #thanksfortheheadsup

The Instagram pic caption, says it all, “Looking for a new wife according to @womansdayaus and other misleading outlets! Honey you still love me right?! @elsapatakyconfidential”. The pic also reveals his superhero muscles, something which reflects the actor’s efforts in staying in shape.

The Australian actor required a superhero physique to fit into his role of Thor, the Norse god of thunder. The Norse mythological character was adopted from the popular Thor series published by Marvel Comics. To bring the character to life, Hemsworth, focused on a workout regimen to build his strength and agility. His goals were very clear and he shared in an interview, “In the comic strip Thor looks to be around 500lb [227kg], so obviously that wasn’t my goal, but it was very important for me to look the part and be as powerful as strong as I could while still maintaining that element of agility.”

Hemsworth has always been a fitness fanatic. His workout regimen before his role in Thor included combat sports, rugby drills, and boxing. He was trained by his personal trainer, Steve Walsh, a professional rugby player.

The role of Thor, required Hemsworth to achieve more muscle mass. He followed a hypertrophy-oriented workout designed by celebrity trainer, Duffy Graver. He is reported to have gained 20 pounds for his role in Thor. Graver followed a simple training model that did not focus on exotic exercises or new equipment.

Day two, could be a chest workout including dumbbell bench presses with a warrior fit incline, weighted dips, cable flye, and hammer strength chest presses. It could be a leg muscle workout on day three, with back squats, leg presses, leg extensions, standing calf raises, and walking lunges. The next day may include shoulders workout with military presses, barbell shrugs, and dumbbell lateral raises. The fifth day would be exercising arms with skull crushers, dumbbell hammer curls, and rope press-downs. This training would also blend in an abs circuit.

The actor was also assisted by Michigan-based personal trainer, Michael Knight, director of Art of Strength, to maintain his superhero shape. His workout plan included kettlebell routines, cardio, and weightlifting.

To compliment his workout, Hemsworth followed an extreme diet. He adopted a protein-heavy diet to maintain his bulky and strong physique.

He said, “I basically overfeed on protein and endless amounts of chicken breast and steak and fish and vegetables and brown rice.”

The Ghostbusters: Answer the Call star, hired the help of food and fitness guru, Luke Zocchi, for his onscreen Norse God look. His diet included vegetable soups, salads, chicken, fish, and daily protein smoothies. He increased consumption of fibrous carbohydrates (like spinach and broccoli) and reduced intake of starchy carbohydrates (like white rice and potatoes).