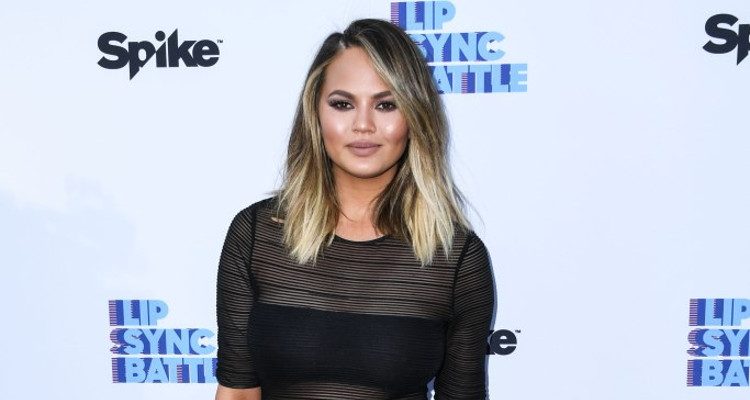 This was reportedly her first post-baby shoot and she looks stunning. Teigen donned a turquoise colored leotard and is seen working on her biceps, doing push-ups, and other exercises. The model is also seen munching on french fries and a hot dog while working out. LOVE magazine proudly posted Teigen’s video shoot.

The video was shot by celebrity photographer, Doug Inglish. Teigen’s classic aerobics routine features an 80s workout look and makes working out during the holiday season quite relatable.

The 31-year-old model is also featured as the cover girl of Elle Australia’s January issue. She recently took to Instagram and posted, “I lovvvvvvvvve this cover and I lovvvvvve you @elleAUS – thank you for allowing me to grace your pages!! And working with some of your best friends is a blessing to say the least.”

I lovvvvvvvvve this cover and I lovvvvvve you @elleAUS – thank you for allowing me to grace your pages!! And working with some of your best friends is a blessing to say the least. Love you, @jenatkinhair, @1maryphillips and @mrmikerosenthal

Here is another photo of Teigen from the shoot of Elle Australia.

Teigen looks incredibly fit and many of her fans must be curious about her fitness regimen. Keep reading to find out her workout and diet regimens.

To keep in flawless shape, Teigen, heads to Physique 57 to tone her body. She told SELF magazine, “I work out every day.” She prefers working out in a group as it helps her to compete. She follows Body by Simone and includes a mix of dance, cardio, and strength training in her workout regimen. She also likes to partake in SoulCycle classes.

Chrissy Teigen, who gave to birth in April to her daughter, Luna, looks stunning in her recent post-baby shoots. On losing baby weight, she told E! News, “You just realize you have to give yourself time and understand that you push out a baby, and it took this long to put on the weight, and it’s not going to peel right off, and that’s OK.” She added, “Because listen, you shouldn’t have to rush to shed anything. It’s OK! It’s fine. Enjoy your baby. Don’t go crazy.” Now, this is a wonderful piece of advice for mothers-to-be who are curious on how to stay in shape.

The stunning celebrity also includes a dance-based cardio, Pilates, and barre method in her workout routine. She likes to balance her exercises and also includes exercising on planks. She also admits that she does not like to exercise too hard.

Chrissy Teigen loves food and it is evident through her cookbook, Cravings: Recipes for All the Food You Want to Eat, and the sequel on its way. She spends a lot of time in the kitchen and her Instagram feeds confirms this.

For example this post which is captioned, “Roasted butternut squash over arugula with a garlicy honey dijon dressing thing I dunno fuck these aren’t official names yet ok!! #cookbookin #makingcravings2 #dayfour!!”

Here is another post with the caption, “Lunchtime cobb! Broiled the corn in the same pan as the roasted bacon – best move I’ve ever made in my life.”

Lunchtime cobb! Broiled the corn in the same pan as the roasted bacon – best move I've ever made in my life

She fulfilled most of her pregnancy cravings like KFC chicken, Frank’s lasagna verde, and more. She does not believe in restraining herself from her beloved foods. However, for her bikini shoots like the LOVE calendar workout video, she follows a restrictive diet. She reduces her consumption of high carbs, junk, processed, and other unhealthy foods.

Her diet plan includes high-protein foods like eggs, turkey, avocados, and bacon. During shoots, she prefers to eat sashimi and fibrous salads, and also skips eating dinner. Teigen is a breakfast fan and likes to have eggs for her morning meal. Her daily dose of omega-3 includes green juices, sea vegetables, and raw almonds.

Chrissy Teigen’s fans are definitely excited about her featuring in the annual LOVE calendar video and the Elle Australia’s January issue. Meanwhile, to stay in shape like the celebrity, try adopting her healthy lifestyle.