Home > Food Facts > Is Coconut Meat Good For You? 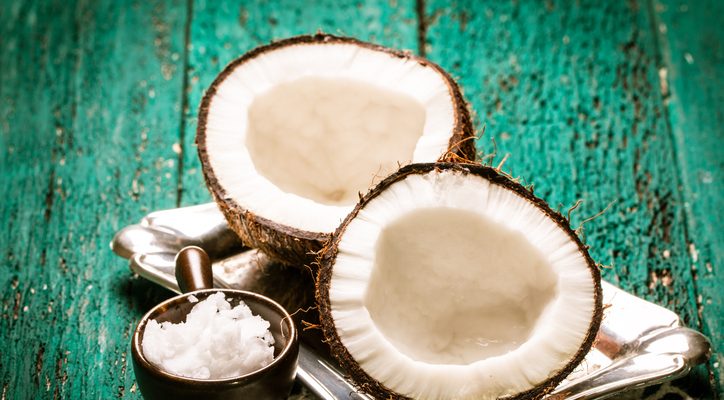 Many people have used coconut oil as a healthy source of fat, but surprisingly, many may have not tried coconut meat. What is coconut meat? Coconut meat is the flesh of the tropical coconut fruit—also called the cocos nucifera palm.

Coconut meat nutrition is packed full of vitamins and minerals. Coconut meat health benefits are seemingly endless, and people living up north should certainly consider coconut meat in your diet. Let me explain…

Coconuts grow on coconut palm trees from the family Palmaceae, which will thrive in tropical climates.

In fact, coconuts are a large part of the diet for many living in tropical regions, and it is a very versatile and indispensable food for millions living in the Pacific Islands, and South and Southeast Asia.

And yet, many living in colder regions may have never eaten raw coconut meat. Coconut meat is considered juicy and tender, tough and fibrous, or slightly thick and crunchy, depending on how long the kernel has been stored.

Is coconut meat good for you? You bet it is. The coconut meat benefits are pretty great. First off, coconut meat is extremely nutritious and is sold in grocery stores with the shell removed. It can be eaten plain, shredded onto salads, added to smoothies, or sprinkled onto baked goods. 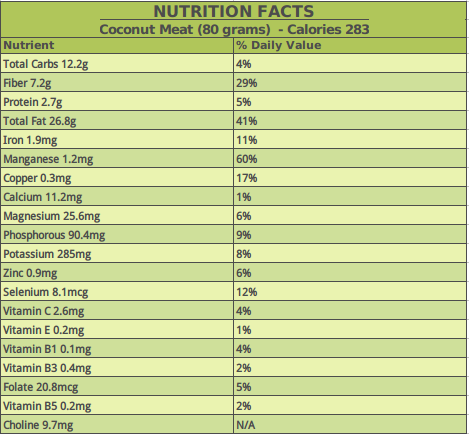 How about coconut meat calories? Well, one cup of coconut meat contains 282 calories, with most of it coming from 26.8 g of fat. That said, it contains the healthy saturated fats called medium-chain fatty acids.

Coconut contains the important saturated fatty acids, including lauric acid, caprylic acid, and capric acid. From these three, the monoglyceride of lauric acid called monolaurin has the most antiviral, antimicrobial, and antifungal properties.

The following is a coconut meat nutrition chart that contains credible information for cup of shredded coconut.

Is Coconut Meat Good for You? Know it’s 8 Health Benefits

1. Helps Eliminate Parasites from the Body:

The fiber in coconut meat has therapeutic properties for treating parasite infestation. It can help expel and kill giardia, ringworms, tapeworms, and other parasites.

In a study published in the Journal of the Association of Physicians of India in 1985, researchers from India found that coconut meat was a more effective vermifuge, or parasite treatment, than most medications on the market, except for niclosamide. Coconut meat is considered non-toxic, while niclosamide side effects include constipation, vomiting, nausea, abdominal pain, and itchiness.

The high-fiber content in raw coconut meat acts like a prebiotic. As a result, the coconut feeds the good bacteria in the intestines and also keeps you regular. A diet high in processed foods and low in non-digestible fiber leads to hard-to-pass stools.

The fiber in coconut will, therefore, help improve digestion and the absorption of key nutrients. It will also relieve digestive symptoms related to ulcerative colitis, stomach ulcers, and Crohn’s disease.

Coconut meat is considered low on the glycemic index, and the insoluble fiber in the meat helps slow the rate where carbs get turned into sugars in the body. As a result, your insulin and blood sugar levels are kept in check.

4. Destroys Candida and Other Harmful Organisms:

Coconut meat will kill fungi and yeast that causes candidiasis, thrush, athlete’s foot, and other infections. The medium chain fatty acids in coconut meat have the ability to destroy candida and other pathogenic microorganisms.

Everyone knows calcium is for strong bones; however, saturated fat is actually necessary to help transport calcium to the bones. Some studies suggest that saturated fat is harmful for bones.

But coconut meat contains saturated fat in the form of healthy medium-chain fatty acids, which benefit the bones instead of harm them.

When shopping for coconut meat, it is best to select organic, unopened, young coconut. How do you make the most of coconut meat? There are several recipes using fresh coconut that are not only nutritious, but are also delicious.

Store-bought coconut butter is pretty expensive. Luckily, you can make your own at the fraction of the cost, especially when you buy shredded coconut in bulk. Coconut butter is then perfect for making desserts, or adding to a smoothie.

Instead of shredded coconut, this recipe calls for unsweetened large-flake coconut. The following recipe is great as a snack or adding to salad, roasted Brussels sprouts, or other roasted root vegetables. 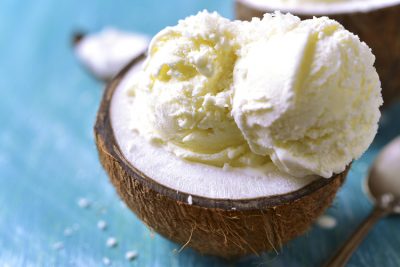 Coconut meat can be juicy and tender, and can be added to various dishes like salads and smoothies. Other tasty coconut meat dishes can include coconut butter, coconut bacon, and coconut ice cream.