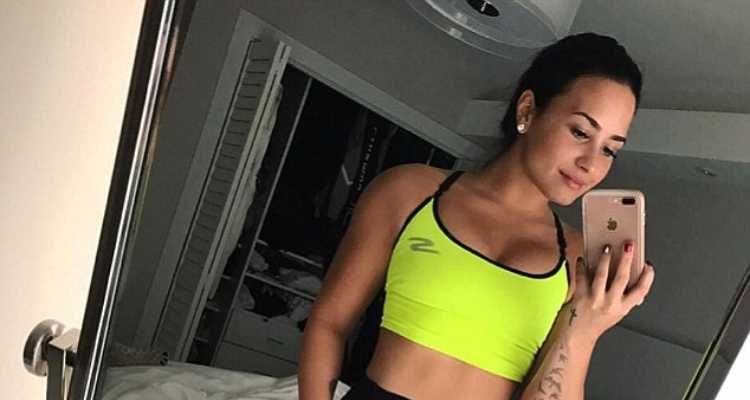 Demi Lovato uploaded a video on Instagram training at L.A.’s Unbreakable Performance Center, which she refers to as her oasis!

In the video, we see the singer/actress dressed in black t-shirt and grey track pants throwing fierce punches to her trainer, Jay Glazer. To prevent her tresses from being an obstacle in her drill, she tied her hair in a bun. We bet you can’t find anything that could keep Lovato away from boxing and martial arts!

Joe Jonas and his brother Nick Jonas are a fans of the Unbreakable Performance Center too.

Lovato’s rep confirmed that the star has suffered from emotional and physical issues for some time. She has also struggled through eating disorders and confessed to getting involved in self-destructive things.

Now, she is addicted, but this time it is a healthy addiction. She has been hitting the gym for four hours every day for the past nine months! Though it sounds incredible, its not for her.

Unbreakable’s founder Jay Glazer tells People, “This is her safe haven. Demi will be here for four hours a day. It’s her one place where she doesn’t have to be a pop star. She’s talked a lot about her addictions, and this has become her healthy addiction. She lights up when she comes in here.”

He continues to say, “She’s more coachable than most of our fighters. She doesn’t put ego in, she does it right—and she is vicious!”

Demi Lovato’s training starts with hour-and-a-half of mixed martial arts. Every day she switches her workouts between boxing, Muay Thai, ground fighting, and Brazilian jujitsu. After a short recovery, she bounces back to performance workout with high reps and low weights, with little rest in between. The performance workouts target to tone her whole body.

Her trainer says her exercises are extremely intense and are comprised of three different exercises with no rest. He continues saying, “She’ll do a push, a pull, and lower-body move, so let’s say a chest push, a pull for your back, and then some sort of squat, but something low-impact that won’t bulk her.” Her exercise routine ends with abs workouts.

After such exhausting workouts, she has 30 minutes of recovery therapy each day, like Phoenix Thera-Lase medical laser therapy.

It helps her heal and reduces swelling and inflammation by massaging recovery sleeves every day. Lovato also opts for I.V. therapy twice a week, and cryotherapy two to three times a week.

Workout is a part of her routine that she never misses out. Her trainer can see Lovato emerging stronger every day and witnesses the transformation in her glowing face.