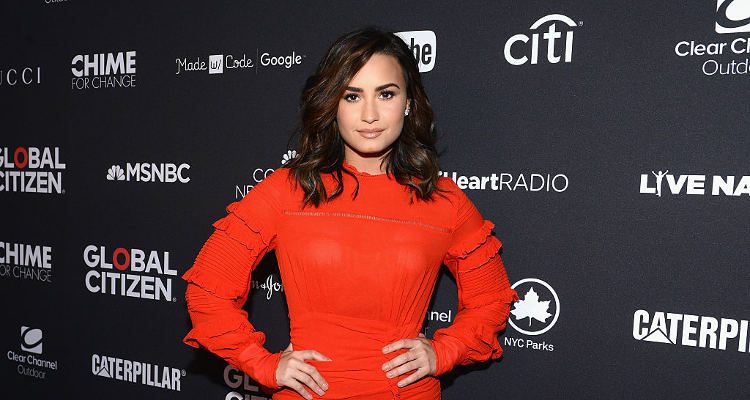 Demi Lovato is receiving criticism after commenting on a drawing that a fan produced of her. The sketch, which was based on a promotional photo of the singer, depicted Lovato as a mermaid with noticeably larger breasts and a slimmer waist.

The backlash from fans quickly escalated, and one fan body-shamed the 24-year-old with an edited version of the drawing that revealed her to be much larger. The singer has previously struggled with eating disorders and has come a long way in learning to love and accept herself.

The original drawing was created by 17-year-old artist Vladimir Serbanescu in July and recently resurfaced on Instagram. The singer commented on a repost with, “Is that how my boobs should look?” Many fans felt the singer was being rude.

Although the original image received numerous compliments on the Instagram post, Lovato was not sending the same type of love. Lovato followed up her original comment with, “It’s gorgeous but that’s not my body.”

The original artist spoke up to explain that the image is of a mermaid – a mythical creature – and so, he understands that Lovato doesn’t actually look like that. Yet some of Lovato’s other fans are coming to the singer’s defense, saying she has come a long way since her eating disorder and shouldn’t be ridiculed just because she is proud of her body shape.

Lovato has made her struggle with her body and bipolar disorder very public and has taken to her social media accounts to show fans just how hard she is working at being healthy and obtaining the body shape that she loves for herself.

The online “feud” has sparked a debate over whether body shaming can occur in any form – even mythological ones. Of course we know that Lovato is not a mermaid; and frankly, no one has really seen one. But it raises important questions about how we experience body shame.

In the video for “Body Say,” Lovato bares it all, rolling around in bed sheets with nothing on. She’s clearly made great progress, and now she is more confident than ever. That doesn’t mean she wants to be portrayed as something she is not.

It seems when it comes to body shapes and sizes, Lovato has a lot to say. Even more recently, she targeted Taylor Swift’s infamous “squad” by declaring that her group of friends doesn’t consist of anyone with a “normal body.”

Lovato went after Swift earlier this year for simply paying for the troubled singer Kesha’s legal fees rather than speaking up about women’s issues in general. This time around it is about body types.

Lovato shared with Glamour that not only is Swift’s squad unrealistic, but also that many aspects about the “Bad Blood” singer do not promote women’s empowerment, but rather tear women down.

There’s no doubt that Swift’s squad is compiled of many beautiful women, but is Swift sending out the right message to many of her young fans?

So far, Swift hasn’t responded to Demi Lovato’s accusations, but maybe she’s still caught up with the “Kimye” fight that occurred over the summer.