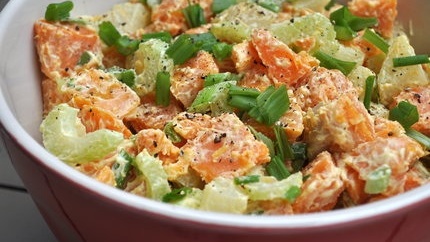 With picnic season now here, cold summer salads are a staple—especially potato salad. It’s simple, easy to transport and, generally speaking, it’s a crowd pleaser. But admit it: Sometimes the staples can get a little boring, so why not add a bit of a twist—and a nutrition boost—to your regular old potato salad with sweet potatoes.

The orange tuber, which basically just refers to a tube-like underground vegetable, is a nutritional superstar, with its biggest bonus being that it can make potato salad one of the best choices for those with diabetes, since sweet potatoes are a low-glycemic alternative to white potatoes. Sweet potatoes contain all the vitamin A you could ever want in one day (about 400% of your daily intake), lots of fiber and protein, vitamin C, vitamin B6, iron, calcium, magnesium, manganese, and potassium—and no fat! So that covers your immune system, eye health, blood pressure, digestive system, bone health and metabolism.

One aspect you’ll want to watch is that sweet potatoes do contain a lot of sugar, albeit natural sugar, which isn’t so detrimental to your health compared to its refined counterparts.

For this recipe, I didn’t make too many changes from what would be considered a traditional potato salad recipe. I did skip the eggs—some people like them, some people don’t. I also swapped out half the mayonnaise with non-fat Greek yogurt to cut down on the fat content in the sauce and improve the creaminess.

The fresh in-season dill adds a nice flavor to the dish, but it’s not necessary; I had some left over after making some rosemary-dill hummus, but if you don’t have some in the fridge or garden, feel free to skip it. While the recipe calls for adding it to the sauce, my sister isn’t a big fan of dill. Instead, I set some chopped dill on the side to add as desired. I also included white and sweet potatoes for color and to reduce the overall sweetness of the dish, but you can easily substitute white potatoes for more sweet potatoes.

Feel free to get creative with the recipe and leave any suggestions in the comments below. 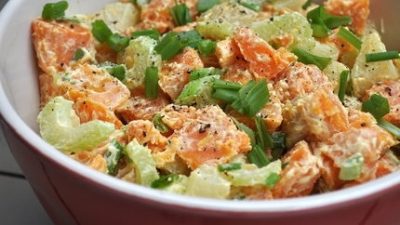