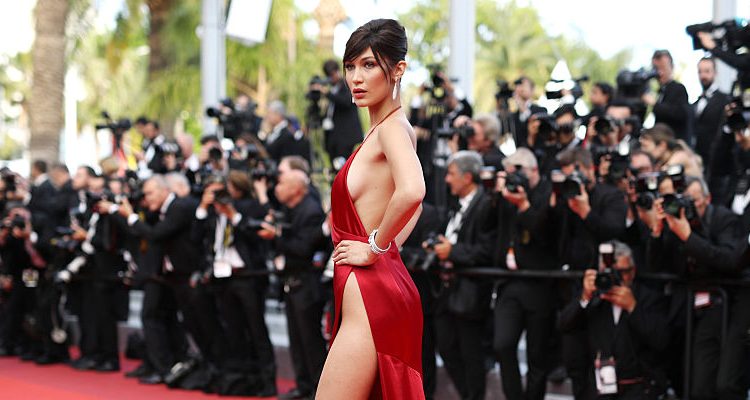 If Gigi Hadid and Bella Hadid weren’t sisters, they would surely be rivals! There has always been a competition between the Hadid sisters and the older one, Gigi, was always ahead of the game. Bella Hadid, however, has also emerged as an eminent personality, gracing the cover of 28 magazines and eight fashion shows in 2016! She has around 9.5 million Instagram followers.

In December 2016, Models.com nominated Hadid for two Reader’s Choice Awards—Model of the Year and Social Media Star of the Year. She was also voted as Model of the Year by the industry. Recently, the supermodel sisters even paired up for the Moschino Spring/Summer 2017 fashion show.

Bella Hadid recently Instagrammed a pic showing off her toned body in a black bikini. She smiled as she posed resting one hand on the beach lounger, while stretching her legs out on the white sandy beach. The other hand held on to a straw hat positioned to cover her eyes from the harsh sun rays. Hadid captioned the pic, “where i belong.”

How did Bella Hadid manage to beat out her supermodel sister, Gigi? Keep reading to know the secrets to that incredible bikini body.

The young model has a high metabolism and she loves to have a pizza diet every so often. She also indulges in coke, french fries, burgers, and grilled cheese. She admits that her weight fluctuates often, and knows that this is not considered a healthy diet.

She balances her indulgences with a healthy diet of veggie soups and avocado toast. She also eats a lot of fruits and drinks enough water to keep her glowing and hydrated. Another secret to her glowing skin is a glass of green juice every week. It detoxifies her body and energizes her, too.

She eats a high-protein, clean diet and sticks to it even if she is traveling. She confesses that eliminating dairy, wheat, and junk food have made her more strong and she feels more healthy from within. While traveling, she opts for fruit rather than munching on junk. She follows the same diet, even if she is preparing for a show.

Bella Hadid has been active since she was just two years old! However, since her rise to prominence, workouts are no longer a big part of her lifestyle. She has been a huge fan of horseback riding since childhood, and still engages in it today.

She likes to work in isolation with her trainer, Rob Piela. Hadid loves cardio exercises as they make her sweat. She likes to go for a walk around New York or just run on the treadmill. She also includes yoga and Pilates in her routine to keep her flexible and strong.

Even if she finds working out difficult on some days, she tries to workout at least for 15 minutes. Bella Hadid insists that her strategy for keeping her figure is to give 100% to her workouts when she does have the time.