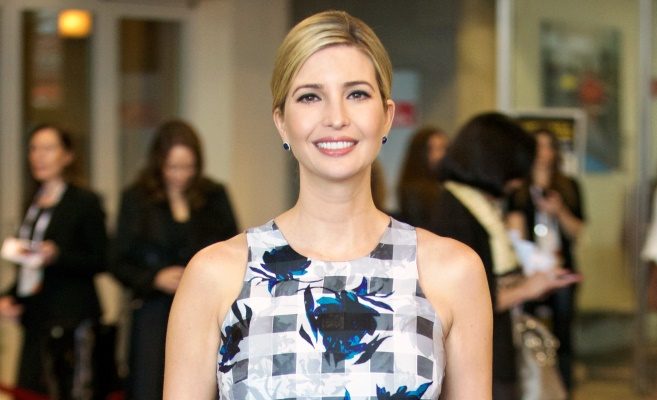 Everyone knows Donald Trump right now. The outspoken 70-year-old is the Republican Party nominee in this year’s US presidential election. Trump has had an illustrious career as a businessman and host of NBC’s reality TV show The Apprentice.

Trump’s business-savvy daughter Ivanka Trump, age 34, has also had a career as a model, writer, and fashion designer. Between campaign appearances for her father, taking care of three kids, and running her own company, Ivanka Trump’s fitness routine is still a top priority. Ivanka Trump’s early morning exercise routine is often posted on Instagram.

Below is a pre-weekend workout video that Ivanka Trump posted recently:

Quick workout in before the #weekend. #FitnessFriday @nyfitness_petermonge

Earlier in the month Ivanka Trump again showed off her early morning workout routine on Instagram. The video featured Ivanka Trump performing squats at the gym:

What are Ivanka Trump’s body statistics? Ivanka Trump’s weight is 141 pounds for her 5’11 frame. She also has a flat stomach and abs, and buffed legs. Ivanka Trump is certainly an active mom that is in good shape.

Ivanka Trump’s children are partly responsible for her commitment to a healthy lifestyle. Trumps wakes up at 5:30 a.m. for meditation and exercise, then she showers before children Arabella, 5, Joseph, 2, and Theodore, 4 months, get up for breakfast at 7 a.m.

Ivanka Trump workouts at the gym in her building or at the hotel gym when she travels. Trainer Peter Monge has put together a workout program for Ivanka to follow. Trump’s morning exercise influences her entire day. It is no wonder that she easily bounced back after all three of her pregnancies. She lost 40 pounds after her first pregnancy and 30 pounds after her second child.

The business executive also listens to a TED Talk in the morning, gets dressed, and reads the paper before getting her kids out of bed. As they get older, the routine and schedule changes, so she needs to adapt.

In the past, Ivanka Trump has worked out with personal trainer Rhonda Malkin, who designed a fusion workout with the combination of dance, Pilates, yoga, and meditation. Ivanka Trump also runs with her husband Jared Kushner.

Trump also credits her healthy diet to her toned and slender figure. In fact, Ivanka Trump loves to cook her own meals. For breakfast she prepares Greek yogurt and berries or oatmeal with flaxseed, berries, chia seeds, cinnamon, walnuts, goji berries, and almonds.

Ideas for #mealplanning that will make the week fly by. (Link in profile.) @maria_marlowe #MealPrep

In her first pregnancy, Ivanka Trump’s diet was very carb heavy, and included lots of pasta, pizza, and burgers. But most of the time Trump eats a nutrient-dense diet that is low in carbs.

She also avoids junk, processed, and other unhealthy foods. Instead she eats lean protein and complex carbs. Her favorite protein foods include eggs, chicken, and salmon. Other healthy food choices include various soups like broccoli, pea, and vegetable soup.