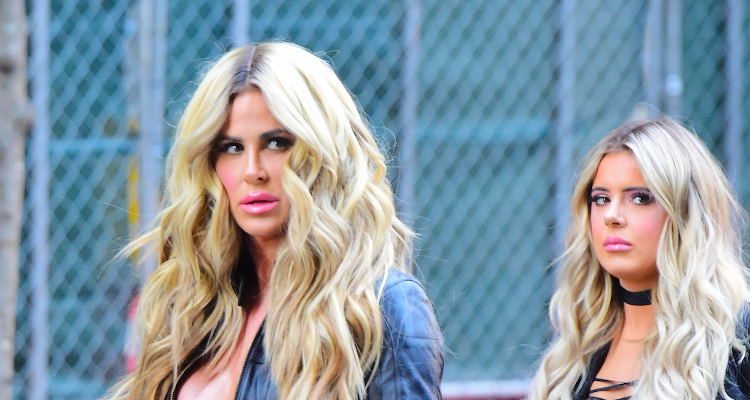 Don’t Be Tardy reality TV star Kim Zolciak-Biermann says she will be right by the side of husband and current NFL free agent Kroy Biermann.

But the 38-year-old revealed on episode 2 of the new season of Don’t Be Tardy that she refuses to live in Wisconsin or Buffalo.

Zolciak-Biermann’s daughter Ariana Biermann, 14, has been reluctant about a move to another city and says she would be upset if the new location doesn’t have a Chik-fil-A fast food place.

Ariana also insists that she is happy with her friends and life in Atlanta. Kim’s assistant and daughter Brielle, 19, was also anxious about a possible move, saying that she doesn’t want to move to Wisconsin. Brielle Biermann isn’t really living up to her new assistant role and actually spends a lot of time Snapchatting with Chef Tracey Bloom.

Brielle suggested that she hold down the fort in Atlanta if her mother and stepfather decided to leave the city. Kim and Kroy also have four children of their own, including Kash, Kroy Jagger (KJ), and twins Kaia and Kane.

Kim Zolciak-Biermann originally appeared on the reality TV series The Real Housewives of Atlanta from 2008 to 2012. Later in 2012, Zolciak-Biermann received a spin-off Bravo show called Don’t Be Tardy for the Wedding, which focused on her wedding prep to Biermann.

In the second season, the show title was shortened to Don’t Be Tardy, which is now in its fifth season. Don’t Be Tardy is a play on words from Zolciak-Biermann’s music career and semi-popular 2008 dance track called “Tardy for the Party.”

Although Kroy Biermann was a free agent when episode 2 filmed, he signed with the Buffalo Bills in August only to be cut by the team a couple weeks later. The 31-year-old outside linebacker played with the Atlanta Falcons from 2008 to 2015.

On the Don’t Be Tardy episode, Biermann’s agent Buddy Baker asked Kim Zolciak-Biermann what cities she would want to live in, and she responded with New York City, Miami, and Tampa Bay. Biermann is again a free agent and is still looking for another team.

Hopefully, Kroy Biermann won’t be out of work for long, and his family can have a successful move to another city. Biermann just wants another team to call him.

In the meantime, Biermann is back in the gym to prepare for when another team comes calling. Check out Kim’s Instagram post from a couple of weeks ago of Kroy Biermann’s intense barbell lifting:

Always working!!! @kroybiermann always has perfect form that’s what I need help with! ? Kroy spends hours and hours training .. When you love what you do it’s easy ❤️

Kroy Biermann spends hours and hours training and got back to his workout routine just days after he was released from the Buffalo Bills. Biermann’s commitment to his workout shows he is ready for whatever team decides to sign him.

After the birth of their children, Kroy apparently exercised with Kim Zolciak-Biermann by walking three miles every night.