Home > Food News > Don’t Wash Your Chicken, Unless You Want to Get Sick 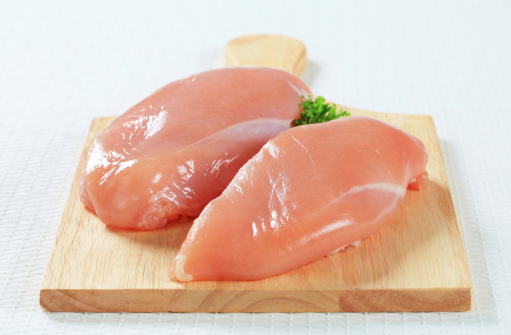 If your first step in preparing chicken is washing it, then you’re doing it wrong, says a new food safety campaign. It may sound counterintuitive, but washing chicken can actually cause more damage than good. In fact, according to Drexel University food safety researcher Dr. Jennifer Quinlan, the belief that you need to wash your chicken is misleading and false—and can actually cause more bacteria to spread, rather than kill it.

“In our focus groups, we were hearing over and over again that people wash their chicken,” she told Prevention.com. “In fact, 80-90% of all consumers were telling us they washed their chicken.”

Perhaps the idea that washing your chicken helps prevent foodborne illness started as an old wives’ tale that was handed down from generation to generation—but the splatter that happens when you wash your chicken can risk contaminating many surfaces in your kitchen, like your cutting board, sink, and countertops. Plus, contrary to popular belief, rinsing your chicken before you cook it does not reduce the chance of bacteria developing.

PLUS: How to Prevent Foodborne Illness

Uncooked chicken can contain two common bacteria: Salmonella or Campylobacter, and rinsing chicken won’t help destroy them. “If you wash it, you’re more likely to spray bacteria all over the kitchen and yourself. Rinse water is not hot enough to kill bacteria anyway,” said the university’s press release.

One of the problems is that rinsing chicken can cause aerosolization, the process that occurs when a raw chicken or fowl is washed, and the water’s spray actually causes harmful bacteria in the food to become airborne, spreading it all over your kitchen and yourself.

To get the message out, Quinlan and her team created educational videos called “Don’t Wash Your Chicken!” which dispel the myth that rinsing chicken gets rid of bacteria, and actually may be causing more harm than good. The United States Department of Agriculture (USDA), which funded the campaign, recommends that people do not wash their chicken.

“Washing your raw poultry increases your chances of spreading bacteria around the kitchen basically. It does not get rid of the bacteria,” said Quinlan in the video. “What’s really going to kill that bacteria that we know is on the chicken is proper cooking and that’s really all that’s going to completely get rid of that bacteria.’

Next time, you’re preparing chicken, don’t wash it first—just make sure to cook it thoroughly to get rid of bacteria and reduce your chances of foodborne illnesses.