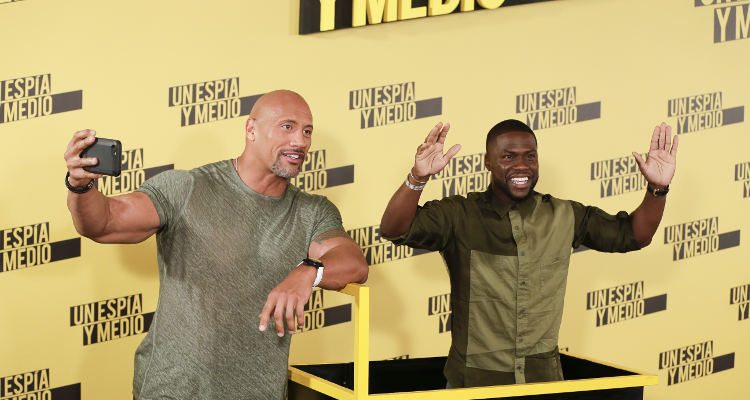 Day 1 of shooting “Jumanji” is officially in the can. We had a amazing first day. The chemistry & energy of our cast & crew was beyond amazing!!!! This movie is going to be dope as hell….Can’t wait to get back to work tomorrow @therock @karengillanofficial & jack black!!! #Jumanji

Although the first Jumanji film fit into the children’s adventure genre, the second Jumanji is looking more like a comedy.

Each character seems to have a different role for the movie: Johnson, 44, looks like an India Jones type, while Hart, 37, looks confused and a little out of place. The 28-year-old Gillan resembles Lara Croft, and Black, 47, appears like a classic jungle explorer.

Here is Dwayne Johnson after he finished a recent workout.

I was putting on my best mean face and looking extremely sweaty and large, but for some reason she laughed at me when I said “Well I don’t like little kids.. especially little girls”? This lil’ sweetheart Ashlyn waited patiently for almost 2hrs to meet me while I finished my workout. Great to meet you honey, keep up the great work in school and sorry I got my sweat on you ? On a personal note, moments like this are easily one of the best parts of fame. #Hawaii #AlohaSpirit #ForSomeReasonICanNeverIntimidateKids #JustAdults ???

Kevin Hart also does workouts on a stair climber.

Message to @kingjames ….I’m out here chasing greatness chump!!!! I’m about this life SUCKA!!!! P.S This machine whooped my dumb ass…. You got the juice champ but know that I’m on yo ass…”Pause” #HustleHart

Even Karen Gillan is flexing her muscles in preparation of her Jumanji role.

So, the Jumanji 2 cast is ready to go; however, it isn’t the first time Dwayne Johnson and Kevin Hart have teamed up for a movie role. Johnson, the muscle, and Hart, providing comedic relief, teamed up for this year’s Central Intelligence.

Dwayne Johnson has always had big muscles. The intense bodybuilder look that he’s known for has translated to the big screen—Johnson is constantly being cast in movie roles that call for big man, including 2004’s Walking Tall, 2006’s Gridiron Gang, and 2014’s Hercules. After all, it takes a big man to play the son of Zeus.

For Hercules, Dwayne Johnson took his workout and fitness program to an entirely new level. The six-foot five-inch 260-pound Johnson spent the majority of his life training to become a professional football player, world-renowned WWE wrestler, and now one of Hollywood’s highest grossing movie stars.

To look like Hercules, Dwayne Johnson significantly elevated his training routine. Johnson trained six days a week, and only had one day off.

Johnson starts each day with a 50-minute cardio session before working on a specific body part. His legs are the only muscle group that receives more than one workout per week.

Working out is really what anchors Johnson’s day. He describes his training as biking, hiking, yoga, and meditation rolled up in one.

What about the other cast members of Jumanji 2?

Hart in particular has a very intense workout routine. Hart is featured on the cover of the October 2016 issue of Men’s Fitness, and works out with personal trainer Ron Everline, who helps Hart build upper-body strength.

Hart’s 30-minute workouts feature push-ups, bench presses, the rowing machine, and curls. Hart also prides himself on a very healthy diet of baked chicken, brown rice, salads, and baked vegetables. But, he will sometimes cheat and eat some fried chicken.

The actors for Jumanji 2 are looking good, and are ready to entertain audiences when the movie is released next summer.