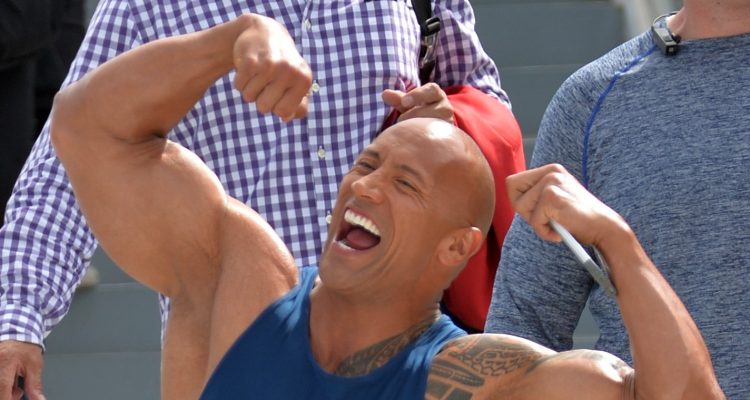 Dwayne Johnson, better known by his wrestling alias “The Rock,” is one of the biggest, buffest stars in Hollywood, and he uses a combination of intense workouts and a diet rich in protein and vegetables to build muscle.

Johnson is literally one of Hollywood’s biggest stars. In fact, since transitioning to movies, Johnson has grown even bigger than he was in his wrestling days.

To pack on muscle, Johnson combines diet, workouts, and supplements. He works out six days a week, with one day for rest.

He does cardio to help burn fat for almost an hour each day, then focuses his attention on training a specific muscle group through intense weightlifting exercises:

Between three to seven different exercises are dedicated to each of those muscle groups on those days, many of them presumably high in weight and low in reps, to build muscle. Johnson doesn’t mess around in the gym.

To have the energy for his workouts, Johnson eats a lot of food. Each day, The Rock eats at least six or seven meals, and when preparing for a movie role, he may even eat more than that. His diet is designed to give him lots of energy to build muscle and burn fat, so it’s high in protein and complex carbs.

Dwayne Johnson’s diet contains a lot of protein, including fish, chicken, and egg whites. And he doesn’t have just a bit of these foods—he eats over three pounds of meat every day. Johnson also has multiple protein shakes throughout the day, including after workouts.

For energy, Johnson also eats plenty of complex carbohydrates from healthy foods such as vegetables. He likes broccoli, asparagus, and salads, as well as baked potatoes. He also eats white rice, which is a good source of simple carbs. Using this diet, Johnson can fuel his intense six-day workouts.

So if you want to look like The Rock, then you need to be eating a lot and doing workouts almost every day. Focus on eating proteins, vegetables, and meats, and you may end up as powerful as Dwayne Johnson.