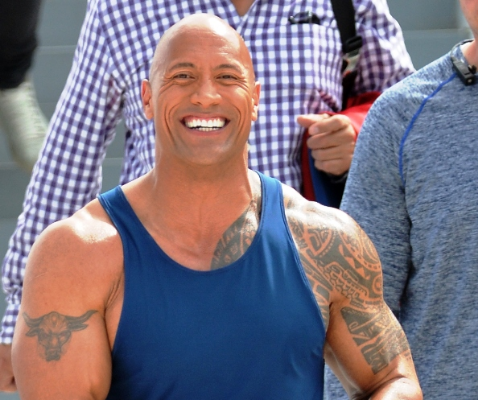 Dwayne “The Rock” Johnson is making some big waves with his animated Thanksgiving hit movie, Moana. Johnson voices for the demi-god character, Maui, in the musical fantasy adventure film that was released by Walt Disney Pictures on November 23.

Moana is sizing up to be a big Thanksgiving hit movie and is estimated to surpass $80 million during the five-day holiday weekend debut. The superstar, who has a fan following of over 71,000,000 on Instagram, posted , “Here’s a taste of the cool chemistry me and @auliicravalho have in #Moana. OPENS TODAY. Enjoy…”

Here's a taste of the cool chemistry me and @auliicravalho have in #Moana. OPENS TODAY. Enjoy…. #JustGetOffMyCanoe

While fans are excited about watching the movie, Johnson gave more reasons for his admirers to lookout for Moana. The celebrity sings the song, “You’re Welcome,” for his demi-god character. The actor also sang a duet with songwriter, Lin-Manuel Miranda, during the film’s Los Angeles premiere. He took to Instagram later and posted, “‘Well anyway let me say, you’re welcome, for the wonderful world you know.. Me and the musical arts genius himself Lin Manuel Miranda duetting the song Lin wrote and I sing in #Moana, called ‘You’re Welcome.’”

"Well anyway let me say, you're welcome, for the wonderful world you know.." Me and the musical arts genius himself Lin Manuel Miranda duetting the song Lin wrote and I sing in #Moana, called "You're Welcome" Best part about this performance is Lin droppin' the "people's elbow" as we close out the song. #HeartStoppin #ElbowDroppin #YoureWelcome #MOANA IN THEATERS NOW. Happy Thanksgiving and enjoy..

The demigod, Maui, has opened a debate because he is portrayed as an obese character. The title character in the film, Moana, is voiced by singer, Auli’i Cravalho. The lovable, obese, and laid-back character of Maui, is very much in contrast to Johnson in real life, as the celebrity likes to stay super fit and is incredibly ripped.

Fitness fans religiously follow and emulate the fitness regime of the superstar and will no doubt go watch the movie, despite the contrasting nature of his animated on-screen role.

Are you wondering about Dwayne “The Rock” Johnson’s workout routine? Does he indulge in cheat meals? Keep reading to find out how he stays in shape.

The Hollywood A-lister is in exceedingly super shape, which is achieved through a rigorous workout regimen. He probably enjoys light humor and this post proves this, “Photographers taking pictures of me like they’re from National Geographic shooting a mating silverback in his natural habitat has me cracking up right now;).” He is wearing a printed tee saying, “Hardest worker in the room.” We’re sure his fans agree!

BTS footage from my training session for our new @underarmour #RockCollection "HARDEST WORKER IN THE ROOM" tee. Drops for you next month. Photographers taking pictures of me like they're from National Geographic shooting a mating silverback in his natural habitat has me cracking up right now;). #RockCollection #UnderArmour #HardestWorkerInTheRoom #NotJustAnotherSaying #ItsLife COMING SOON

Johnson loves to post his workout videos and pics on Instagram and his messages show his passion for fitness. For example this post where he says, “We all live crazy stressful lives and that stress goes directly to your neck and back. Keep those areas strong. Talkin’ to all you ladies too. The 45lb plate and thick silverback neck is optional.”

Those damn Sunday audibles. Today's plan was to stay in my hotel suite all day and get all my work done. Those electronic mails things, approvals, marketing campaigns etc. No training just a focused work day and go to bed early for a 4am wake up tomorrow morning. Rapido Rock they call me, cause I was done with all my work by 3pm. By 315 I realized I can't do this sitting around sh*t anymore. By 345 I called an audible to my team, fired up our vehicles and by 4pm I'm in the gym doing one of my fav exercises for neck. Years of pounding from football and wrestling forced me to always work my neck. Extremely beneficial and I highly recommend you guys stretch out and work your neck muscles a few times a week. We all live crazy stressful lives and that stress goes directly to your neck and back. Keep those areas strong. Talkin' to all you ladies too. The 45lb plate and thick silverback neck is optional. Good Lord I hate sitting around. I'm sure one day I'll need therapy. #SundayAudibles #ThickNecksAndCheatMeals

Finished the week strong with legs today. Currently running a 6 day split with only Sunday's off. Extremely taxing training program – its kickin' my ass, but I luv the challenge. Great results as I'm clockin' in at a lean 262lbs. Big shout to my training/diet coaches @hanyrambod and @daverienzi for the constant evaluation and strategies towards every goal. We get after it and outwork all our competition. Quality and sustained success in anything we do will never come easy or overnight. It's all about being disciplined to put in the work and do the little things every day… for YEARS. Speaking of discipline, tomorrow I'm going to crush pancakes and French toast, with a sh*t ton of syrup cause it's my cheat day which ='s proud gluttony. #TheLittleThings

Johnson is seen doing his leg workouts in the pic and he says, “Finished the week strong with legs today. Currently running a 6 day split with only Sunday’s off.” This proves his dedication to workouts, something which fans will surely wish to adopt.

“The Rock” knows that following a healthy diet is as crucial as working out. While shooting for the Hercules film, it was reported he consumed seven meals a day. To maintain his enviable physique, he may eat more than 5,000 calories a day. His meals consist of cod, steak, eggs, vegetables, and chicken.

The celebrity superstar is also popular for his cheat days, and he often Instagrams his cheat meal pics. For example, this post which is captioned, “20oz Ribeye & 1lb baked potato (thank you #ChopsSteakhouse in Atlanta) and oatmeal chocolate chip cookies (thank you Chef Christophe). #SundayNightAMAs #CheatMeal #DeadCowAndCookies.” The hashtag “#CheatMeal” says it all.

And then this happened while watching the AMA's. 20oz Ribeye & 1lb baked potato (thank you #ChopsSteakhouse in Atlanta) and oatmeal chocolate chip cookies (thank you Chef Christophe). #SundayNightAMAs #CheatMeal #DeadCowAndCookies

To have cheat days like “The Rock”, you would also need to work out like him. The truth is, the superstar works aggressively hard to stay in shape.

This Thanksgiving, “The Rock” fans have a lot to celebrate with his animated hit movie, Moana. While his admirers are sure to enjoy his on-screen demigod character, Maui, his fitness followers will stay tuned for his workout and diet updates on social media.